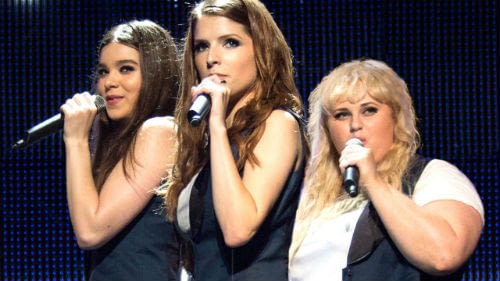 -Guys, I’m starting to worry about Pitch Perfect 3. First there were rumblings that Anna Kendrick and Rebel Wilson were clashing (but that was from a very dubious source, so easy to dismiss). But then there were rumours about Kendrick and Elizabeth Banks clashing. And now Banks has dropped out of directing because of “scheduling conflicts.” What’s happening? I’d assumed these were the most easy to get along with peeps in Hollywood…

-It’s been a rough week for Instagram couples. First Taylor and Calvin, and now Gigi Hadid and Zayn Malik have split.

–Johnny Depp had a “cheerful and chatty” night last night in Denmark, and refused to go back inside the club when his bodyguard urged him to. Then he got cozy with a blond fan. That’s swell.

-It’s the most wonderful time of the year: we’re in the midst of a Mariah Carey press tour! Watch her primp for fan selfies (while the fans wait), and get interviewed in a bubble bath.

-Glee’s Mark Salling is set to surrender to authorities today in that child pornography case. He was spotted leaving a bank with a $100,000 check before heading to court.

-Ok, so the Rogue One reshoots might be worse than we originally thought. They involve 8 weeks, 32 sets and (gulp!) 40% of the film.

–Zachary Levi says “It’s so fascinating, girls say chivalry is dead. And it’s like if it’s dead, you fucking killed it.”  Shut up, Chuck.

–This makes me want to watch The World’s End again.

-This feels like information I didn’t need to know, Jessica Alba.

-I didn’t know I needed to see a video of David Beckham and Mario Lopez dancing at Eva Longoria’s wedding, and now I don’t know how I lived without it.

-Ouch! Dominic Purcell was injured on the set of the Prison Break reboot. As nasty as the photo looks, production isn’t being delayed. Gotta love his attitude! (“I got a free nose job.”)

–Leonardo DiCaprio is “seriously dating” a model. Sure he is.

–Matt Damon‘s MIT commencement speech is all kinds of charming.

-God, I love this article: “Why we’re terrified of fanfiction.” I don’t read fanfic (but I do follow a hilarious Tumblr that excerpts it, and I once found myself vigorously defending it on a plane when the guy next to me asked about the Rainbow Rowell book I was reading, and then proceeded to roll his eyes when I mentioned its fanfic angle). Still, I think the point of the article extends to the attitude a lot of female-leaning pop culture.

-Jeez, just when you thought the American Gods series couldn’t sound any better, they go and cast Gillian Anderson.

–Drake‘s idea of hitting on someone is to make the heart shape with his hands and point to them. I expected nothing less.

–Jena Malone pops up in the trailer for a 3-hour(!) cut of Batman v Superman as Barbara Gordon. Um, is she supposed to look like Felicity Smoak?

-The View fired another cohost.

-A female reboot of Ocean’s Eleven with Cate Blanchett and Sandra Bullock? Take my money now!!

-God, I can’t wait for the new season of UnREAL. Remember when summer TV was a wasteland?

True Detective Will Have Three Leads in Season Two