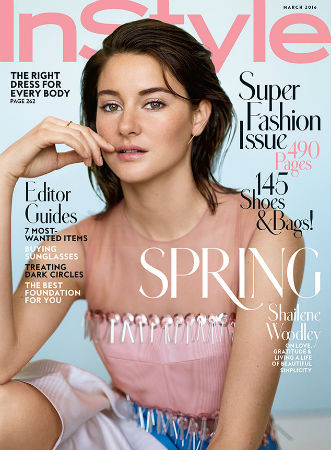 –Shailene Woodley looks fresh-faced and lovely on the new cover of InStyle, in which she describes her dating life using a pretty boss pie metaphor: “I’m very curious to see where my life ends up when it comes to partnership. I always think of my life as a pie. My pie is f–king fine. I’ve got the best pie! It’s so delicious. If you want to add some ice cream and s–t on top, you are welcome to join the party, but you don’t get to take a slice of my pie.”

-In her new Elle story (no, I still haven’t forgiven the terrible cover shot) Brie Larson reveals she hasn’t spoken to her father in 10 years.

-There is no more entertaining Kanye West than Kanye West in full album promotion mode.

-Oh wait — things just took a turn on Kanye’s Twitter feed. I take it all back!

-Scary. According to reports, DMX was found unresponsive by police and resuscitated after nearly dying of a drug overdose last night.

-This is right: Rachel McAdams isn’t hitting the award circuit hard for a win, she’s doing it for momentum. And she’s clearly hired a new stylist. I can’t remember a time she’s had this many fashion hits in a row.

–Matt Lauer kept trying to get Katie Holmes to talk about Tom Cruise, but she (very diplomatically) shut it all down. Someone needs to give her media trainer a raise.

-This is actually pretty great: Sylvester Stallone asked Creed director Ryan Coogler if he should boycott the Oscars.

-Not going to lie: I really needed these photos of Tom Hardy filming a skinny dipping scene today. Bless you, interwebs!

–Rose Byrne and Bobby Cannavale (aka – the celeb couple I always forget about but still adore) just welcomed a son.

-I love that the internet is now obsessed with guessing who Liam Neeson‘s “incredibly famous” new girlfriend is. Charlize Theron? Kristen Stewart? Nigella Lawson?  This is more intriguing than the last Taken movie…

-The first trailer for Mike and Dave Need Wedding Dates is out. Sidenote: Zac Efron needs a new agent.