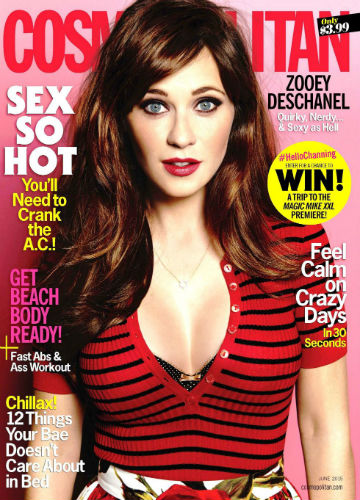 –Zooey Deschanel and her husband Jacob Pechenik have named their daughter Elsie Otter. In real life.

–Jaden Smith is straight up trolling us now.

-Even Mulder is starting to have his doubts in The X Files’ new trailer (which, unlike yesterday’s promos, seems official).

–Bill Murray showed up on Jimmy Kimmel Live looking like this last night, for reasons unknown.

-And here I thought The Royal We news was going to be the biggest thing to happen to Lauren Graham this week, and then came the Gilmore Girls revival news. I’m not quite sure how I feel about this. I love love love that show (and not just because my review was blurbed on the DVD box set!), but I’m not sure they’ll be able to capture the magic of the original. I adore this line from the NYT article: “Netflix has become a digital ‘Peter Pan’: If you clap hard enough and believe, your beloveds never have to die.”

-Like the rest of us, Amy Adams wishes she was cool enough to hang out with Amy Schumer and Jennifer Lawrence.

–Missy Peregrym‘s farewell to the Rookie Blue cast is really quite sweet.

–Gerard Butler was at the Jays game last night? I’m guessing he wasn’t sitting in the nosebleeds like us.

–Drake surprised the internet with a new video — and made us all appreciate his sweater game.

-Slate’s interviews with writers/showrunners about what it’s like to be a POC in Hollywood is a fascinating read.

-There was a shakeup at SNL today when Weekend Update anchor Colin Jost stepped down as head writer. Is this because he someone made Amy Schumer unfunny?

-I still have no idea what The Force Awakens is going to be about, but the new trailer is pretty damn fun. Daisy Ridley and John Boyega’s reactions video to the trailer are also awesome.

-This Beyond the Sea featurette shows Brangelina getting ready for a night out. If the entire film is just two hours of this, I’d still watch.