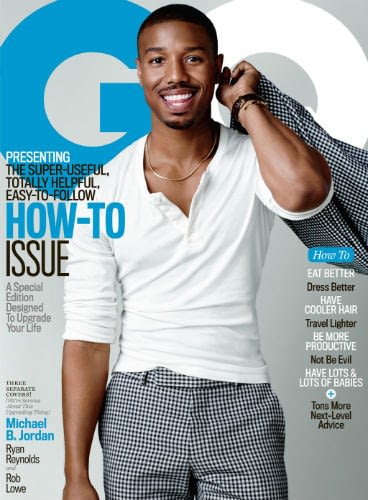 –Michael B. Jordan is getting some Twitter heat for his GQ interview. I didn’t hate it (though I would have liked it a lot more if he didn’t refer to women as “the females” a whole bunch) and I think the interview as a whole gives a fuller picture than that one quote about Kendall Jenner, but I get it.

-In today’s edition of ‘love is a sham and we’re all going to die alone’ news: Amy Poehler and Nick Kroll have ended their two-year relationship. Excuse me while I go eat my weight in waffles…

-Say what you will about Anne Hathaway, but this video of her trying not to freak out when she spots Mariah Carey at the premiere of The Intern is all kinds of cute.

-It’s pretty likely that Josh Brolin is mocking Ryan Gosling when he talks about “young Hollywood punks” in this new interview.

-Nice! The Agents of SHIELD crew recruited Melissa Benoist and some DC friends for their latest entry in the Dubsmash Wars.

-The Drake and Serena Williams rumours continue to heat up. I’m so here for this.

–Tom Hiddleson wants there to be more equality between the sexes when it comes to movie nudity, and he’s willing to lead the way.  Dooooo it!

-Podcast lovers: a new report suggests the upcoming season of Serial will tell the story of  Sergeant Bowe Bergdahl, the U.S. solider who was held in captivity in Afghanistan for five years.

–Chiwetel Ejiofor is rooting for Michael Pena to be the next Bond and … I don’t hate it.

–Liv Tyler is the latest actress to speak out against sexism in Hollywood, saying when you turn 38 you become “a sort of second-class citizen.”

-Netflix released some interesting data on how many episodes it takes for shows to hook you, and it’s way longer than I have patience for. In these days of peak TV, if I’m not in by episode four of a show, I’m probably never revisiting it. Of course by that logic, a lot of my favourite past shows (The X Files, Angel, Arrow, Parks and Rec, 30 Rock, etc.) wouldn’t have made the cut if they debuted today.

-When I think Britney Spears I don’t usually think “pranks!” but what do I know?

-Despite the fact that it got not great reviews and turned Kermit into a weirdly cynical dick, The Muppets reboot got great ratings. Sigh.

-I’m not watching promos ’cause I’m trying to avoid spoilers (which is impossible, it turns out), but critics got The Flash premiere screener this week and have been gushing about it all over Twitter. Here’s the latest trailer.

-Speaking of CW shows, Legends of Tomorrow just cast the crazy scary woman from Mr Robot, which pretty much guarantees I’m in.

-Rob Lowe isn’t mincing words when he talks about why he left Brothers & Sisters and The West Wing.

-This article about the implications of per-theater box office is kind of fascinating.

-Truth, starring Robert Redford and Cate Blanchett, got a little lost in the TIFF shuffle this year (especially when compared to Spotlight), but the trailer is solid.

Tatiana Maslany Gets Cloned for Flare