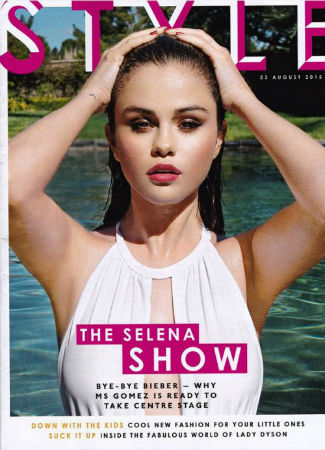 –Selena Gomez is firing back at the Sunday Times for focusing their interview on her quotes about Justin Bieber and not her new album. Ok… but she had to know that if she talked about it, that’s what’s they’d lead with, right? She’s been around long enough to get the game by now.

–Justin Bieber is getting ready to promote his new single, and his reps have reportedly banned him from doing live interviews because they’re terrified of what he’ll say.

-I have to admit, Bieber‘s “Where Are U Now” with Diplo and Skrillex is kind of my song of the summer (what? they play it at the gym!), and this NYT video interview about how it came together is pretty damn great. If you’re into music stories that delve a bit deeper into how the sausage is made, you’ll love this.

-Remember last month when I wondered when we should start worrying about Jimmy Fallon? I think the time might be now. The police are reportedly refusing to release the 911 call made about his hand injury, citing “personal privacy.” His accidents are piling up. Even Variety is writing about it in a way that makes you go “hmmm…”

-Why is the Internet so angry with Max Landis for questioning why his American Ultra flopped? I’m questioning it too. I didn’t love the movie, but it was better summer fare than a lot of other stuff I’ve seen recently.

-I see that Mel Gibson is still a shining beacon of civility and good manners.

–Alison Brie and Dave Franco, who’ve been dating since 2012, are engaged. Thank goodness. We needed something like this to restore our faith in Hollywood love this summer.

–Alanis Morissette joined Taylor Swift last night for “You Oughta Know” and it was kind of fantastic. (It helps if you repress the fact that Taylor was only 5 when Jagged Little Pill came out…)

-I didn’t really expect the 13-year-old star of Girl Meets World to school us all on feminism, but what do I know?

-Twist! The lawyer for Serial’s Adnan Syed filed a court motion this morning asserting that the cell phone evidence placing him in Leakin Park was inadmissible.

-I’m in the middle of making my TIFF picks, and I’m pretty damn tempted to use one of my tickets to watch Matthew Weiner do a live commentary on a Mad Men episode…

–Katherine Heigl is reuniting with Grey’s Anatomy producers for an Ally McBeal rip-off. This bodes well.

-It tanked here, but Terminator Genisys is killing it so hard in China that a sequel is suddenly a very real possibility. As Forbes points out, for “a film to outright flop in America and yet potentially become one of the biggest American exports of all time in China, well, that’s a game changer.”

-I haven’t gotten around to watching any fall TV screeners yet but a recent Twitter convo with some TV critic friends seemed to suggest the only ones worth tuning into are Quantico and The Grinder. Now that The Grinder just lost its showrunner, we may be down to one.

-I wasn’t sure about Benedict Cumberbatch playing Doctor Strange, but this trailer is killing my doubts.

Gwendoline Christie Slays at the Game of Thrones Premiere