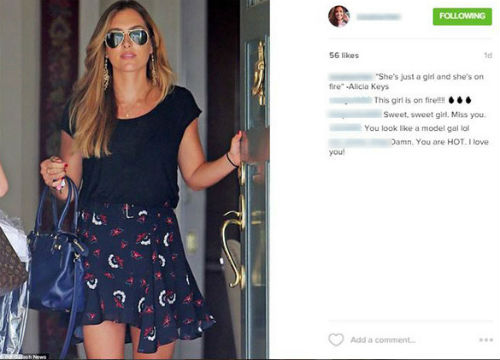 -Just when you thought Ben Affleck couldn’t have screwed up any harder, the hits just keep on coming. The nanny Instagrammed a paparazzi photo of herself with the caption, ‘She’s just a girl and she’s on fire.’ Also, remember the story about Ben and her leaving a family vacation in the Bahamas to spend a romantic weekend in Las Vegas, and Jen found out about it and announced the split days later? Here’s a photo of the nanny on a private jet on the way there.  Tom Brady was there, too.  (Though I’m not buying any theory that Tom and/or Gisele outed the affair to Jen. If there’s anyone Ben should feel comfortable being with his side piece around, it’s TB.)

-Oh, now a “source” insists the nanny was in Vegas on business. Maybe one of those typical nanny conferences?

–Howard Stern spilled a lot of deets about Jennifer Aniston and Justin Theroux‘s wedding, including his complaints about the tiny chairs and cellphone ban and his new crush on fellow guest Orlando Bloom.

–Kevin Bacon is surprisingly successful at ‘Who’s Your Costar’ on The Late Late Show. The best part was admitting that he regularly uses Google’s “bacon number” search feature to see how he’s connected to new people he’s working with.

–Leonardo DiCaprio won a lawsuit against the French magazine Oops for a report that Rihanna is having his baby.

-In a new class-action lawsuit, 40 interns are suing the Olsen twins for alleged wage theft. The lead plaintiff complained that she worked 50-hour weeks on tasks like “inputting data into spreadsheets, making tech sheets, running personal errands for paid employees, organizing materials, photocopying, sewing, pattern cutting, among other related duties.” Um, she just described every unpaid internship I ever did.

–Seth Meyers has ditched the usual monologue and will now start Late Night behind a desk doing a Weekend Update-y thing.

-The Affair panel was a TCA today. I gave up on that show last year, but I love how Joshua Jackson charmed every single critic in the room this afternoon, according to their tweets.

-Despite it flopping harder than Kim Kardashian at a Mensa convention, Fox is reportedly eyeing a Fantastic Four followup.

–Hugh Jackman has discovered Dub Smash. My day is ruined.

-I’ve never been a wrestling fan (because, you know, logic), but damn this gif of Stephen Amell at WWE is hawt! After his brief (but more importantly, hawt!) bout last night, he’s now been invited to fight on SummerSlam. The CW is probably having panic attacks over this, but if they had any sense they’d milk it for all the publicity they can get — and maybe even get his costars to show up in his corner. The amount of press this thing is getting is staggering. Plus, his fandom is crazy (as proven by their reaction to yesterday’s casting news about Oliver’s new love interest, which left everyone flipping tables until the producers were forced to clarify that she’ll only be in flashbacks).

-At the CW’s TCA panel, they announced that the lead character from NBC’s Constantine (which was cancelled) will be reprised on Arrow. Has that every happened before?

-The CW was probably going to announce that Britney Spears will guest on Jane the Virgin at their panel today, but Brit-Brit beat them to the punch by tweeting it first. In any case, she’ll play Rogelio’s nemesis and I’m so here for that.

-Also leaking before the CW panel, they’re planning a series based on The Notebook which sounds…like a terrible idea. Hasn’t Rachel McAdams suffered enough lately?

-In other Rachel McAdams-ish news, if True Detective’s utter failure has people turning to Slings and Arrows for their McAdams fix instead, than something good will have come from this mess.

-Also, there’s one thing about True Detective that didn’t suck: Ray‘s dad predicted his fate in that trippy dream sequence a few episodes back.

-Plus, did Nic Pizzolatto basically plagiarize himself in True Detective S2? Charming.

-Alison Brie and Jason Sudeikis are friends without benefits in the new Sleeping with Other People red band trailer.

The Dixie Chicks Stage a Comeback