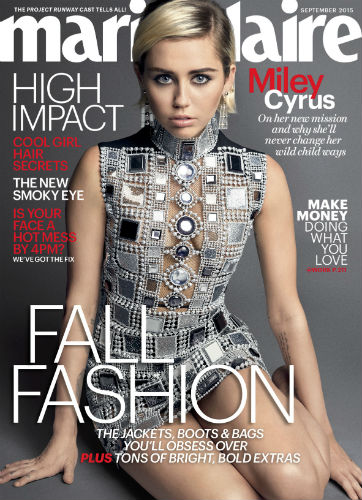 -You know, I don’t disagree with Miley Cyrus in her Marie Claire cover story for calling out a double standard when it comes to her vs. Taylor Swift. They both control their (incredibly manufactured) personas, but because Miley’s isn’t conservative, it riles people up in ways Taylor’s never will.

-Speaking of, The Daily Beast’s article on Anne Hathaway and the culture of celebrity misogyny is worth a read.

-So even People couldn’t snag photos of Jennifer Aniston wedding dress, huh? That surprises me.

-Also, Jimmy Kimmel officiated the wedding which is kinda sweet.

–Ben Affleck’s nanny is weighing her TV interview options and it’s got me like:

–Nicki Minaj called Meek Mill her “baby father” during a concert, but that doesn’t mean she’s pregnant. It just means that words are hard for famous people.

–Kelly Rutherford made the risky move of not sending her children back to Monaco, and now her ex-husband is accusing her of child abduction.

–Zac Efron may be joining The Rock for the Baywatch movie, which means movie studios have somehow found a way to covertly mine my dreams for ideas. I’m totally ok with that.

–Amy Schumer‘s HBO special just got its first teaser, and it’s way too short. But at least we now have a date: Oct. 17.

–Jennifer Lawrence took a break from her filming schedule to visit a children’s hospital in Montreal because she’s aces.

–FKA twigs admits that she still hasn’t seen the Twilight movies. If she wants to stay engaged to Robert Pattinson, she should keep it that way.

-During their TCA panel, FX unveiled their annual ‘state of TV’ report and revealed that by the end of 2105, there will be 400 scripted shows (comedies and dramas) airing on network, cable and streaming services. I had a conversation this weekend (and then another today on Facebook) with friends who say there are no good TV shows on right now. I disagree; I think we’re in an insanely awesome TV era but you have to search for it now; it’s not on network TV anymore. I’m LOVING Mr Robot (which technically doesn’t debut in Canada until Sept), UnREAL is better than any Lifetime series needs to be, and there are a ton of shows I haven’t had time to tune into this summer, but sound good. Every TV critic I follow seems to love AMC’s Humans and Sundance’s Deutschland 83. Comedy Central’s Review just came back, and FX’s You’re The Worst will soon return for a second season. I gave up on Halt and Catch Fire last year but by all accounts, they re-jigged the show to focus on the female characters and season 2 is amazing. Masters of Sex is too heavy for me right now, but Josh Charles is on it so I’ll catch up someday. Hulu’s Difficult People looks the kind of snarkfest I’d love. And I haven’t even had time to look at Netflix in a while, but it’s comforting to know that new episodes of Wet Hot American Summer are waiting for me when I do. And this is the dead of summer! A few years ago, it’d be a TV wasteland right now.

-Speaking of the TCAs, CBS presented today, and was quick to shut down any questions about The Good Wife’s green screen f**kery. Weirdly enough, Valerie Bertinelli (of all people) was having none of it.

-CBS also debuted a new Supergirl trailer, which smartly veers away from the rom-com, Devil Wears Prada feel of the first one to focus on fanboy-baiting action instead. I saw the pilot and liked it, but I feel like The Flash already checks all those boxes for me. (On the plus side, crossovers with the CW shows are suddenly a possibility.)

-Speaking of CW superhero shows, Arrow just nabbed Parker Young, who was my favourite part of Suburgatory and Enlisted. Tara from True Blood is also on board.

-This story about the filming of Bring It On is full of goodness, including the fact that Eliza Dushku and Jesse Bradford were arrested during production.

–Keri Russell‘s dress at the TCAs is a not my favourite. On the plus side, three of my favourite TV critics (Linda Holmes, Maureen Ryan and Alan Sepinwall) are unintentionally photobombing her…

-Last night’s True Detective finale was so, so bad (and so, so confusing — god bless Slate and Uproxx for posting their detailed explainers. The fact that the Slate one spread through Twitter this morning like an especially robust strain of herpes indicates just how many of us lost the plot). My favourite “review” so far is this article on Pajiba, in which the reviewers all all try to pass it off to someone else because none of them can bear the thought of trying to make sense of it.

-The upside of watching True Detective last night is that HBO used it to debut their first trailer for Westworld, which looks BONKERS. I’m in.

Issa Rae On Being TV’s Queen of Comedy