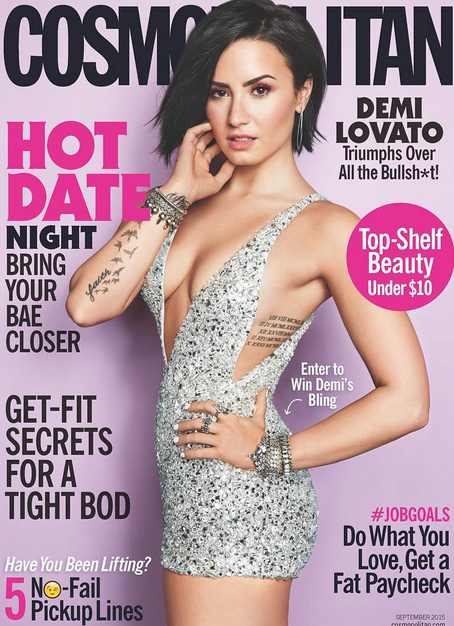 –Demi Lovato’s new Cosmo cover is re-igniting my desire to get a ribcage tat. Damn you, Demi! I’m too old for this shit.

–Gwen Stefani fired her nanny after becoming suspicious of her relationship with Gavin Rossdale. Apparently, this is what every famous woman needs to do immediately.

-Meanwhile, they reportedly don’t have a prenup so shit’s about to get messy.

-In other ‘love is a sham’ news, Ben Affleck and the nanny reportedly left the Bahamas a few days before the divorce announcement and went to Vegas together.

-Meanwhile, I really liked this Grantland article on Gwen Stefani, Nicki Minaj, Jennifer Garner and the dilemma of the powerful woman.

–Stephen Colbert just made my room very blurry with his tribute to Jon Stewart on last night’s The Daily Show.

-Meanwhile, George Clooney is set to be Stephen Colbert’s first guest on his new show. Good call. Remember how charming he was as Rosie O’Donnell’s first guest?

-This is lovely: Dr. Dre is donating his new album’s royalties to fund an arts center in Compton.

-It’s been way too long since we’ve seen Lupita Nyong’o, but this photo of her frolicking is a great comeback.

-I feel like the Blake Lively edition if Toast’s ‘If xx Was My Girlfriend’ might have been written by Blake Lively herself. All the mason jar references were pretty funny, though.

–Salma Hayek says “I think [big movie studios] don’t want me, but I don’t really care.” Does that explain the Everly trailer?

-Everyone’s paying close attention to the Fantastic Four box office results this weekend because of the terrible reviews and the surprisingly complicated history of adapting it. It didn’t help that the director tweeted (and then quickly deleted) a comment last night implying that Fox ruined the movie.

–Jennifer Aniston managed to convince Sia to perform “Chandelier” at her wedding. Also, she brought Courteney Cox, Chelsea Handler and Jason Bateman on her honeymoon, which isn’t weird at all.

-Here’s an excerpt from Mindy Kaling’s new book. She’s talking about the Q&A that I went to!! Fine, just take my money now.

-I really liked While We’re Young — enough that it made me wonder if I had been wrong about Noah Baumbach movies all this time. The New Mistress America trailer re-confirms my original assumptions.

–Elle Fanning struggles for family acceptance as a transgender teen in the About Ray trailer.

The Stars Arrive in Venice