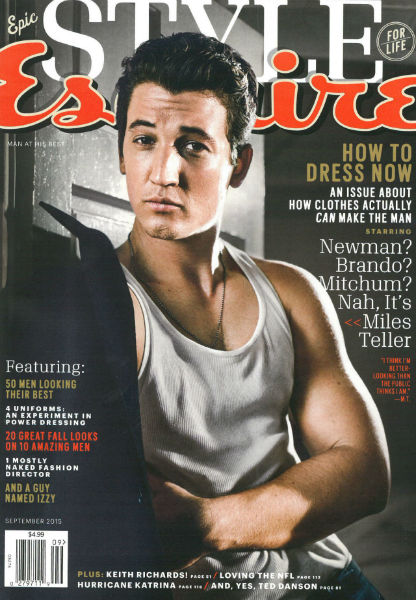 -The older I get, the more I love reading celebrity profiles in which the celeb in question acts like a total dick. There’s something mad refreshing about watching someone throw out all their media training and just let their diva flag fly. Miles Teller takes it to the next level in his Esquire interview by Shia LaBeoufing before our eyes. From needing the reporter to *cut his meat* for him to him calling Joaquin Pheonix “Joaq” to his backhanded compliment of Aaron Eckhart (as Andy Greenwald tweeted, it’s “the Inside the Actor’s Studio version of hugging you while hitting you”), that interview got me like

-In much better cover story news, Idris Elba is the first man to ever grace Maxim magazine’s cover. And how!

Gavin Rossdale‘s split from Gwen Stefani may have been caused by the nanny, because all famous men are apparently idiots.

-Speaking of idiots, Ben Affleck was photographed with the infamous nanny (who allegedly tipped off the paps about where they’d be.) Meanwhile, People magazine is putting a glamour shot of Jen Garner on their cover and penning sympathetic articles about how she weathered his “ultimate betrayal.”  Us Weekly is following suit. For those of you keeping score at home, she’s totally winning the PR war.

-Despite the summer of splits (even Miss Piggy/Kermit and Reba McEntire are getting in on the action), at least Will and Jada Smith are still going strong. (The fact that she calls him her “king” in her tweet about it makes me thinks she really is her Magic Mike XXL character…)

-While promoting American Ultra, Kristen Stewart interviewed Jesse Eisenberg and asked him all the typical questions actresses get during junkets. It was glorious.

-In other fake PSA news, Kevin Bacon calls for more male nudity in a mock ad.

-Just in case you were confused about who’s winning the Meek Mill vs Drake feud, Meek has now resorted to threatening Drake with a wedgie.

-The award for this year’s most awkward panel at the TCAs goes to Amazon.

-A couple of UnREAL costars are dating IRL (but probably not the ones you’re shipping).

-The Mindy Project bloopers are as funny as you’d expect.

–HBO knows that you all hate True Detective this season, but it swears next year will be better. (Apparently the last episode wasn’t totally terrible?)

–Mariah Carey is set to star on Empire. I wonder who they’re going to cast as the person who carries her everywhere?

–Gwyneth Paltrow reveals that it was not her idea to describe her divorce as “Conscious Uncoupling.” Ok, but was it her idea to announce it on GOOP instead of through a publicist, and then have the balls to claim she doesn’t care about pageviews?

-The moment Shanice Williams learns she’ll play Dorothy on NBC’s The Wiz might give you feelings.

-Is there nothing Jay Z can’t fix? Taylor Swift says he’s a big part of the reason why she and Kanye West are now on good terms.

-In one of his last episodes, Jon Stewart very sweetly plugged his wife’s book.

-The early reviews for Fear the Walking Dead are in — and they’re not pretty.

-Now we can see the Deadpool trailer without having to watch shaky cellphone video that was snuck out of Hall H. It’s violent, hilarious, vulgar and just what Ryan Reynolds‘ career needs.