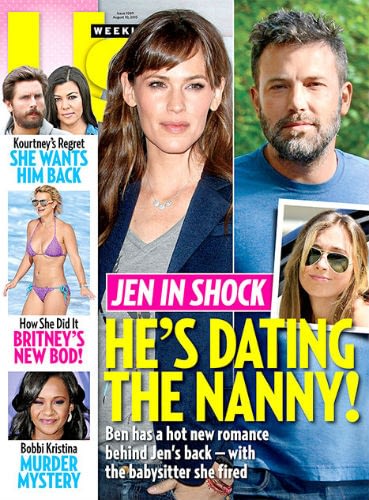 -Us Weekly’s new cover story claims that Ben Affleck is dating his kids’ 28-year-old nanny, a story he is vehemently denying. Let’s hope it’s not true, if for no other reason than it’s just so predictable. Have we all learned nothing from Jude?

-It looks like Channing Tatum‘s deal to play Gambit may be unraveling. That sucks. Not only did I want to see “Channing Tatum, superhero” now I’m never going to get to call him Chambit!

-In happier superhero news, Chris Pine is in talks to star in Wonder Woman — as her supportive mortal boyfriend.

-See? Stories like this make me kind of love Tom Cruise. I know there is lots of…stuff…. in his life, but everyone I know who’s interviewed him has nothing but effusive praise. He knows why he’s there, he knows what you need out of it, and he’s going to do his best to give it to you because that’s his JOB.

-Everyone’s bashing Cara Delevingne for how she handled this morning show interview, but I’ve never liked her more. She was sarcastic, arch and perfectly British in the face of some truly terrible questions.

-Every time Scott Speedman gets cast in a new TV show, and angel earns its wings. And by angel, I mean me. And by wings, I mean an iTunes season pass.

-Oh Jesus. Gwyneth Paltrow is set to release a luxe line of hip-hop inspired clutches with a $1,695 price tag. She’s just trolling us at this point, right?

-Salon’s review of Review perfectly nails why the show is simultaneously hilarious and really hard to watch.

–Antonio Banderas is bringing the story of the Chilean miners to the big screen with The 33. Watch the trailer.

-There are some really interesting tidbits in Out Magazine’s oral history of Brokeback Mountain, like how Anne Hathaway lied about being able to ride a horse and how everyone realized that Heath Ledger had fallen in love with Michelle Williams when he insisted on taking her to the hospital after she fell during the toboggan scene.

-Um, what now? The Pope is forcing the New York Film Festival to postpone The Walk’s premiere.

–Jimmy Kimmel got super emotional during a three-minute monologue about the death of Cecil the lion, the African big cat that was killed by U.S. hunter.

-I’m sure I’ve mentioned this before, but there are certain people I just can’t watch on screen anymore because of their offscreen antics: Terrence Howard, Sean Penn and Chris Brown. Howard’s ex-wife saying he beat her “to within an inch of her life” isn’t changing my mind.

–Colin Farrell talks candidly about his film failures, saying “I can’t believe in the lie that’s being presented to me anymore that I’m a movie star and that everything is great.” If anything good comes from this mess of a True Detective season, I hope it’s that casting directors start considering him again.

-This sentence is chocked full of good words: Tig Notaro is teaming up with Diablo Cody on a semi-autobiographical Amazon pilot.

-Glad to see the Kimmy Schmidt cast is having fun at the TCA tour. Here’s Tina Fey, Tituss Burgess and Jane Krakowski dubsmashing to Beyonce.

-Wait, so now I’m supposed to worry about my knees? Screw you, Hollywood.

–Dr. Dre will maybe release a new album this weekend — his first in 16 years.

-It’s possible that my CW love is blinding me, but a gritty, dystopian, post-modern adaptation of Little Women sounds like something I’d watch the crap out of. I mean, I’m sure they’re going to do ridiculous things with it, but that story makes a good base.

-NPR’s Code Switch has an incredible article on Wyatt Cenac, Key & Peele and being the only POC in the room.

-Meanwhile, Keegan-Michael Key revealed that this will be the last season of Key and Peele. They proved last night that they’re still killing it.

–Rachel McAdams and Mark Ruffalo play Boston Globe reporters investigating the Catholic church in the first trailer for Spotlight, which is coming to TIFF. Looks incredible!

Angelina Jolie on Directing Brad Pitt: “A Therapist Would Have a Field Day”

Rihanna Poses Topless on a Boat