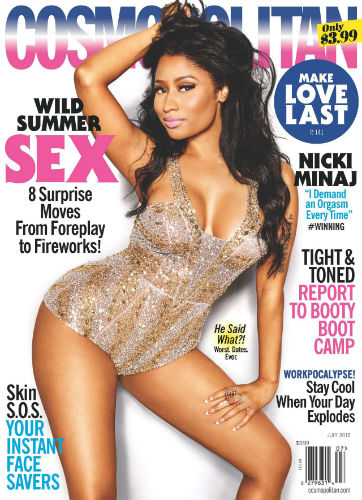 -In the new Cosmo, Nicki Minaj says “I demand that I climax. I think women should demand that” before going on to talk about how she helped teach her friend how to be more demanding in bed. And this hereby marks the first time I’ve ever wanted to be friends with Nicki Minaj.

–Ed Sheeran once dragged Jay Z and Beyonce to his favourite spot in Midtown to cover “Empire State of Mind” for them.  Well shit, now I want to be friends with Ed Sheeran too!

–Connie Britton proves yet again that there’s nothing she can’t do — and that includes Hula-Hooping.

-As terrible as the casting of Emma Stone in Aloha was, Cameron Crowe’s statement about it is actually pretty gracious.

-On a recent podcast, comedian Jen Kirkman talked about a famous male comic who has a notoriously bad rep for his treatment of women. Everyone’s assuming she’s talking about Louis CK, but the podcast episode has since been taken down without explanation.

-Here’s the trailer for Caitlyn Jenner‘s new show, I Am Cait.

-Meanwhile, Jon Stewart called out the media for their looks-obsessed coverage of Jenner. “When you were a man, we could talk about your athleticism, your business acumen. But now you’re a woman, and your looks are really the only thing we care about.”

-If you want to maintain your Channing Tatum lady boner, avoid this video of him dressed up in a frumpy disguise and fooling audience members at an advanced Magic Mike XXL screening.

–Milo Ventimiglia thought it would be funny to take a swipe at the Gilmore Girls in a new web series. He was wrong.

-It looks like we’re getting more Arrested Development, whether we want it or not. The next season will debut in 2016 on Netflix. Here’s hoping the actors’ scheduling works out better this time around so there’s not as much green screened wonkiness.

-Wait, so the Will Ferrell/Kristen Wiig Lifetime movie isn’t dead after all? So was Ferrell’s whole hissy about the media coverage of it fake?

-Jane the Virgin star Jaime Camil‘s Emmy campaign is a thing of beauty!

–Chris Evans and his brother Scott tried to cover James Taylor but got distracted by each other’s cuteness.

–Dave Matthews spotted one of his band’s bumper stickers on a random car, so he knocked on their window and asked for a nearby bar recommendation. Way to stay on brand, Dave!

–Gillian Anderson is imploring fans not to hoard tix to her Broadway show, because she’s the best.

-Meanwhile, The X Files reboot just added Joel McHale to the cast as Mulder’s ally. I like all of those words!

–Jude Law and Jimmy Fallon played a larger-than-life game of pool and things got real awkward.

–Jennifer Lawrence shared the first photo from The Hunger Games: Mockingjay – Part 2 on her Facebook page.

–Mila Kunis can breath easier knowing her escaped stalker has been captured and is back in custody.

–Carey Mulligan rocks the vote in the new trailer for Suffragette.

–Noah Baumbach and Greta Gerwig have teamed up again with for Mistress America. When this comes out, will someone please remind me how much I despised Frances Ha? kthxbi

Ocean’s 8 Cast Takes Over the Met