-Any doubts I may have had about James Corden‘s late night show were just erased with this bit of him carpooling with Mariah Carey. Her Southern accent is amazingly terrible.

–Jon Hamm opened up about his discreet rehab stint: “Life throws a lot at you sometimes.”

-Meanwhile, TV critics have seen the Mad Men season premiere — and their reviews tell us a whole lot of nothing. Matthew Weiner wouldn’t even let them reveal what year it’s set in.

–Justin Bieber hiked up a hill and then got super introspective and deep with a total stranger.

–Kanye and Kim‘s personal photographer might just have the worst job in the world.

–Sam Taylor-Johnson has officially exited the 50 Shades of Grey franchise, which seems like a really solid career move. It’s not like the movies are going to improve.

–Idris Elba is set to star in Star Trek 3 as a villain. I swear, if they cover up his beautiful, beautiful face with Klingon makeup, I’m not going to be happy.

–Chris Carter has confirmed that The X Files reboot will film in Vancouver, which must just *thrill* David Duchovny.

-Meanwhile, Silicon Valley star Kumail Nanjiani (who hosts a podcast called The X Files Files that I need to catch up on) picked nine episodes of the show newbies should watch.  I can’t disagree with any of these.

–Shailene Woodley says “the future of food is in insects.” As someone who once paid a lot of money to eat insects, I don’t want to live in that future.

-The cast of The Flash singing the Firefly song makes me stupid happy. And this doesn’t even include Grant Gustin, who proved he could sing on Glee. This show needs to do a musical episode, STAT!

-The Flash guys sang that song because Joss Whedon supported their Kickstarter, which has almost reached its goal.

–Rihanna dropped her new single ‘Bitch Better Have My Money‘ and it was worth the wait.

–Ben Affleck addressed the Senate Appropriations Subcommittee today, and Jennifer Garner was there to support him.

-A zombiefied Abigail Breslin taunts Arnold Schwarzenegger in the trailer for Maggie, which I kind of wanted to see at TIFF last year but it was weirdly pulled from the schedule after being bought.. 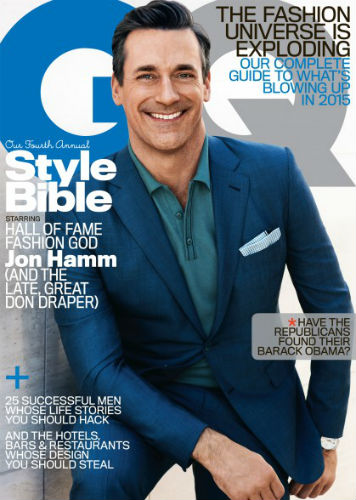 -Proving that famous people can keep their ish locked down if they really want to, Jon Hamm‘s camp confirmed that he just completed a month-long stint in rehab for alcohol abuse. If his new GQ cover is any indication, he’s well on his way to returning to his dapper, healthy hotness.

-We now have visual proof that Chris Evans and Lily Collins are a thing.

-This Vine of Sarah Jessica Parker bitchfacing Tom Hanks is everything I’ve ever wanted from the Internet.

–SJP also spent a big portion of the game reading a book. I feel her.

–Leighton Meester is still best friends with the woman who played Dorota on Gossip Girl, which warms my cold, dead heart.

-My Twitter timeline exploded last night when Deadline posted this ridiculous, click-baiting article wondering if the latest wave of “ethnic” casting on TV is “too much of a good thing?” The outrage was swift and brutal, with everyone from Shonda Rhimes to Vulture reacting in justifiable anger. This collection of Twitter reactions is worth reading (especially scrolling to the end for Kristen Warner‘s thread).

-If you’d like a more nuanced piece on diversity in TV than from Deadline’s TV critic (that’s right; she’s on staff!), read this instead.

-Speaking of great TV features, this Lost writer’s 17,000-word essay reveals which twists were planned vs. improvised. Also, he worried about the initial plan to kill Jack in episode one because his experience with networks meant “you can’t kill the white guy.” It’s fascinating but super long, so here’s a TL;DR.

–Randy Gerber talks about life as George Clooney’s BFF. It sounds as amazing as you’d assume.

-Meanwhile, Tom Ford is returning to filmmaking and he’s taking George Clooney along for the ride.

-If there’s a tween in your life, you might want to give them a hug: Zayn Malik has officially quit One Direction.

–Jesse Eisenberg always struck me as one of those actors who is only good when he’s playing a version of his twitchy, neurotic self (much like Kristen Stewart). But he might just prove me wrong as Lex Luthor.

-I’m sad that the charming and under-watched Looking was cancelled (though HBO is promising a movie to wrap it up).

-The Mindy Project’s ratings hit a series low last night, making me even more doubtful it’ll ever air another new episode on Fox (despite Cancellation Bear’s prediction that NBCU will basically give it to Fox for pennies because they want syndication). It’s primed for someone else to pick it up, though.

-Good on Hitfix for pressing Will Ferrell and Kevin Hart on reactions that Get Hard is homophobic and racist.

-The Hollywood Reporter’s A-list issue is full of goodness, from their list of the most in-demand young actors, and their stories on the highest paid actors, how Alex Pettyfer’s bad behaviour cost him work, and why Taylor Lautner’s career stalled. Their cover story is on Emilia Clarke, who turned down Fifty Shades and is now being billed above Arnold on the new Terminator.

-That Beyoncé-led remake of A Star Is Born may finally, finally be happening — with Bradley Cooper in the director’s chair.

–Steven Spielberg is going to direct the adaptation of Ready Player One, a book that I adored.

–Kelly Osbourne says she relates to Angelina Jolie because she also carries the BRCA1 gene. Meanwhile, here’s a good breakdown of how accessible the testing and surgery is here in Canada.

-Vin Diesel thinks Furious 7 will win Best Picture at the Oscars. Judging by the critics I follow who’ve already seen it and are calling it the worst one yet, he might want to temper his expectations.

-If you had any lingering doubts about the pointlessness of the upcoming Entourage movie, the first trailer will kill those dead right quick. The fact that the “big cameos” are people like Jessica Alba and Kelsey Grammer tells you everything you need to know. (I’m just going to go ahead and assume that Pharrell accidentally wandering onto the set and was too polite to bail.)

-In his GQ cover story, Jon Hamm says Matthew Weiner faked out the cast by writing a false ending to Mad Men. As long as the real one includes some variation of Peggy getting promoted, firing everyone but Stan, and eventually ruling the world, I’m good.

–Mindy Kaling prefers Dawson over Pacey and now I don’t even know if I want to watch her season finale tonight.

-It looks like Miley Cyrus and Patrick Schwarzenegger have gotten over that whole ‘handsy photo with someone who isn’t you’ thing.

-Famous people are tweeting their support for her.

-The Russo brothers are officially directing the Avengers: Infinity War movies. They already have the bona fides, since they did Captain America: The Winter Soldier.

–Cate Blanchett just quoted Tina Fey and it’s the confluence of everything that is right and good in this world.

–James Corden‘s talk show debuted last night, and it fits right into late night’s recent Fallonization by nice, white guys. But hey, the bit where he got Tom Hanks to re-enact all his films in 7 minutes was solid.

-I spent a good portion of the day twitter squealing about The X Files reboot, which sounds like it’ll be a mix of myth and standalone eps. The X Files was the first thing I ever looked up on the Internet. Like, ever. I remember my brother was trying to get me out of his hair and was all “sit here and just type in whatever,” and I stumbled upon XF episode guides, which blew my mind. Because – outside of tiny blurbs in the TV Guide – that info wasn’t really available. The whole thing was a “Holy crap, I just found my people!” moment.

-There’s a big debate about whether one needs to watch the terrible last movie or catch up on the even worse final seasons before the reboot, but I’m following Gillian Anderson‘s lead. She has zero recollection of what happened on the show — even during its heyday. It’s kind of adorable.

-It was such a good day to be a fangirl on Twitter. This hilarious article detailing every Buffy debate sparked even more.

-Here’s the first trailer for Michael Fassbender’s Slow West, which everyone loved a Sundance.