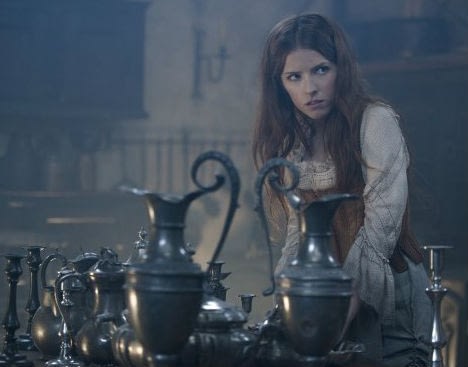 -In a new interview with Variety, Anna Kendrick says she wept through the entire screening of Into the Woods and hopes you do, too.

-Speaking of Anna Kendrick, the first trailer for her *other* musical, The Last Five Years, landed today. I saw this at TIFF and loved it. I’ve had that song she sings at the beginning in my head for about three months now…

-Of course Amal Alamuddin is not pregnant. Stop that.

-This is pretty great: John Legend and Chrissy Teigen paid to send food trucks to the protesters who were out demonstrating against the death of Eric Garner in NYC.

-On the other end of the spectrum, the protests are giving LeAnn Rimes sad face, you guys!

-This might actually be the greatest headline in the history of ever: “Leonardo DiCaprio enters club without girlfriend Toni Garrn, leaves with 20 women”

–Luke Wilson and Imogen Poots just signed on to a new Showtime series. I like her a lot — I hope this makes her an enormous star.

-Just in case you were still holding out any hope, Nick Cannon has confirmed his split from Mariah Carey.

-Do you ever watch My Drunk Kitchen on YouTube? If not, subscribe right now! I’ll wait. Her latest episode features Sarah Silverman.

-Fun: The Flash just hired Mark Hamill to reprise his role as The Trickster, which he played in the cheesy ’90s version of the show.

–Kit Harrington, Sophie Turner and Maisie Williams went to a rave together, which is kind of cute until you think about it too hard.

–Russell Brand could face a Twitter ban after he stupidly tweeted the phone number of a journalist.

-Last night’s episode of The Newsroom was a total mess. There was lots of badness (daddy ghosts, rekindled romances, debates about celebrity apps that were already won five years ago), but the scene that got everyone most riled up was when Don told a rape victim that he was “morally obligated” to believe her alleged rapist’s account until it’s proven otherwise in court. It didn’t take long for TV critics to pounce hard. Even one of the show’s writers weighed in on Twitter to say that when she complained about the storyline, she was kicked out of the room and “screamed at” by Aaron Sorkin. He’s since retaliated by saying that she’s “broken the trust” of the writers room by airing their dirty laundry. Basically, he wrote a rape story and then told a woman to shut up about it.  The irony would be funny if it wasn’t so goddamn gross.

-Here’s the new trailer for Still Alice (aka the movie that will likely land Julianne Moore her first Oscar).