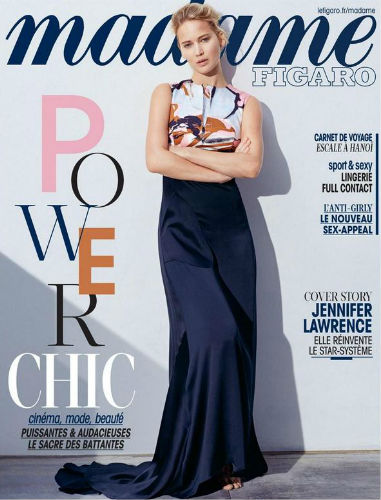 -Why does Jennifer Lawrence look so angry on the cover of Madame Figaro? Is it because American Hustle is being sued over her microwave quote?

–Jessica Biel, who hasn’t officially confirmed her pregnancy, stepped out in a strategically placed sweater.

-I would probably be more upset by Robert Downey Jr.‘s comments about how feminism is “make-believe” if every other single thing he said at the same event wasn’t totally nonsensical. I’m blaming a lack of sleep since becoming a new dad.

-Speaking of people making stupid comments about feminism, Salma Hayek said “I am not a feminist…I believe in equality” (even though that’s the exact definition of feminism). Oh, and she said it in front of Gloria Steinem! ::facepalm::

–Mark Wahlberg throws some Oscar chum in the water in his new trailer for The Gambler.

–Leighton Meester would prefer it if you didn’t parse the lyrics of her new album by making tabloidy assumptions that all her songs are about exes. That’s right. Clearly all her songs about about Dair.

-There’s a new Fifty Shades teaser. This thing doesn’t open until next year, which means we’ll have to suffer through a lot of these over the next few months.

-Um, Benedict Cumberbatch is NOT marrying Sansa Stark, you guys.

–Valerie Bertinelli‘s verbal bitch-slap of Christina Aguilera is a thing of beauty.

-Everyone’s making a big deal about this Beyonce video. I dunno. If zoning out at a sporting event is wrong, I’ve never been right.

-Hmmm…is Jennifer Aniston financing her own movie’s release so she can qualify for the Oscars?

-Will Heidi Montag be the one to save Amanda Bynes? (Spoiler alert: no.)

-It’s a long one, but I really liked THR’s roundtable with writers. Says Gone Girl’s Gillian Flynn: “I had one single dark 24 hours where I was like ‘Did I destroy feminism?'”

-ABC won’t take another selfie. The John Cho sitcom just got the axe.

-Meanwhile, is there hope for A to Z? (Probs not.)

-I stopped watching Cougar Town (mostly because I could never find it on the schedule), but this promo for the final season is hilarious.

-Why is the new trailer for Orphan Black‘s next season geo-blocked? WHHHYYYYYY????

–Nicole Kidman gets evil in the new trailer for Paddington.

Cate Blanchett Is “So F—ing Proud of Emma Watson”

Lindsay Lohan Got Punched In The Face