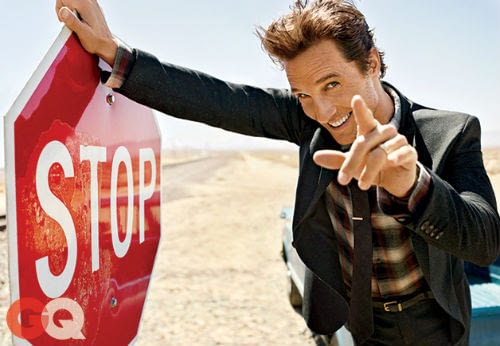 –Matthew McConaughey told GQ that he totally understood everything Rust Cohle was saying in True Detective (sure, he did) and also defends his rom-com roles. I like that. I mean, I still don’t really get why we spent all last year celebrating the reconnaissance of a guy who made shitty career decisions for decades instead of someone who’s been consistently good, but at least he’s not hiding from his past.

–Diane Kruger looks stunning (as per yoosh) on the cover of Harper’s Bazaar Australia, in which she talks about aging gracefully and why she thinks fashion should be fun.

-In other DKrug news, her show The Bridge just got cancelled. I really hope Netflix or someone picks it up, because it really found its feet this season.

-All of the hatred towards Renee Zellweger’s face on Twitter today really bummed me out. Yes, she looks totally different then she used to. But remember A) there’s a long and sad history of mocking her face, and B) she may look different now, but she also looks really, really good. This is a great take on the whole kerfuffle.

-Even though Allison Janney was in the ending of Lost, she too was confused by it.

-Some ridiculous mom wants Breaking Bad toys off shelves because she thinks it’ll led to kids trying meth or something stupid. Bryan Cranston’s response to it was priceless.

–David Arquette appeared to break up with his fiancée Christina McLarty in the middle of a street.

–Shia LaBeouf admits a LOT in this new interview—including that he used to follow Alec Baldwin home and that he choked a director while on acid.

-Also, working out next to Shia is really uncomfortable, apparently.

–Anna Wintour‘s tribute to Oscar de la Renta is lovely.  “His last words to me were I love you, and I said I love you back.”

–Shonda Rhimes’ response to Twitter criticism of the gay sex scenes on her shows is everything.

-The owners of Carrie Bradshaw’s brownstone were unimpressed by Sarah Jessica Parker using their stoop for an unauthorized photoshoot.

–Penn Badgley will play Mary-Louise Parker‘s boyfriend in an NBC miniseries that I want in my eyeballs right now!

-I really liked these articles on why we’re a month into the fall TV season and nothing has been cancelled yet. Basically, no one knows what qualifies as a hit anymore, and the midseason shows are even worse.

–Bradley Cooper and Jimmy Fallon couldn’t stop giggling during his interview last night, and it was kind of adorable. I wish they’d release more uncut interviews like this. Makes you realize how much editing is in these “off the cuff” talks.

-I am going to watch the crap out of Death Comes to Pemberley. I liked the book, and that was BEFORE I envisioned Matthew Rhys as Darcy.  Matthew Goode as Wickham is just icing on the hottie cake.

-Yesterday, we had Taylor Swift being funny for Stand Up to Cancer, and now it’s Britney Spears’ turn.

Did Adele Yell at Chris Brown at the Grammys?