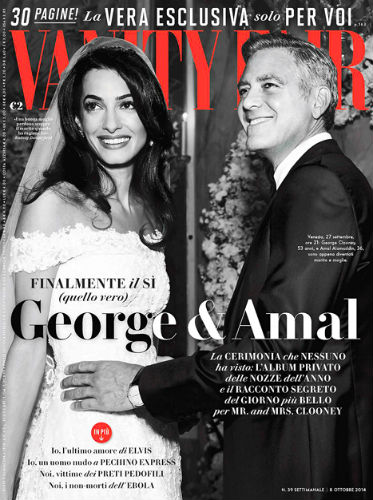 -Clear your day and spent the next few hours poring over these photos of George Clooney and Amal Alamuddin’s wedding.  And these ones. So. Many. Photos.

–Leighton Meester talks about how her values have shifted since she married Adam Brody in the new issue of InStyle UK.

–Cary Elwes wrote a book about the making of The Princess Bride (why am I not reading it RIGHT NOW??!), and he revealed some tidbits from it during his Reddit AMA.

-A new trailer for the final season of The Newsroom has landed. It’s even more pompous and speechifying than usual. I think there’s just too much good TV for me to catch up on right now to hate-watch this season.

-Speaking of good TV, here’s some Arrow scoop. I’m more excited than the return of this show than I was about the debut of any new ones. And according to this story, this is the perfect time to jump in if you’ve never watched it. So jump already and feel the Olicity feels!

-There are a lot of good Bill Murray stories out there, but this one is pretty great.

-It’s kill-or-be-killed in this new clip from Brad Pitt‘s Fury.

–Ellen Pompeo just announced the birth of her daughter Sienna May, born via surrogate.

-I do not, however, want Lady Gaga‘s terrible, terrible new tattoo.

–Katherine Heigl really, really wants you to watch her new show. How else do you explain this?

–Blake Shelton‘s response to the latest tabloid rumours about his marriage? “Eat a dick.”

–Tom Hiddleston and Hugh Laurie will star in a TV series based on a John le Carré book. I like all of those words!

Dear Game of Thrones: No One Believes You

Fred Willard Fired By PBS After Arrest for ‘Lewd Conduct’