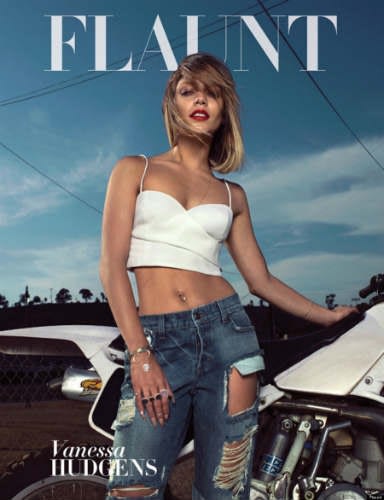 -This is supposedly Vanessa Hudgens on Flaunt’s new cover, but I’m not convinced. (It’s cute that she and Ashley Tisdale are still tight, though.)

–Jennifer Lopez told Chelsea Handler that she likes monogamy because she’s “not one to like whore around and stuff,” slut-shaming single ladies everywhere.

–Leonardo DiCaprio has given up pasta. Pray for him.

-The first teaser for Girls season 4 is all about Lena Dunham‘s stunt double.

-Here’s the first trailer for The Vampire Diaries’ new season.

-When they were shooting The Dark Knight, they ended up interrupting a wedding. On the plus side, the couple now has photos of Tom Hardy dressed as Bane in their wedding album.

-The teaser for Quentin Tarantino’s Hateful Eight has leaked.

-I really liked this Grantland article on the tipping point when comedy-news became more real than “real news.”

-Here’s the new Nightcrawler trailer. I’m really intrigued by this one — just not sure if I’m intrigued enough to use one of my TIFF slots on it.