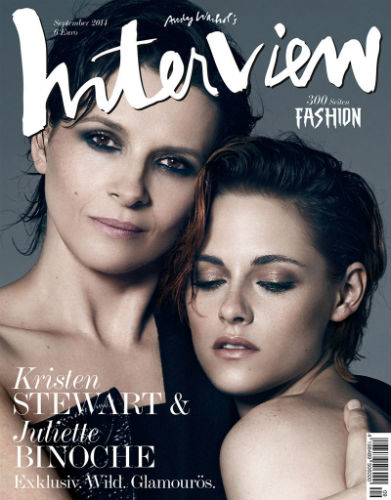 –Juliette Binoche and Kristen Stewart get cuddly on the cover of Interview Germany, in which Binoche admits that she “skipped” Twilight while researching her new costar. I’m going to try to get tickets to their TIFF premiere of Clouds of Sils Maria, which got raves in Cannes.

–Jon Hamm looks all kinds of yummy on the cover of British GQ.

-Oh god. Are Nick Cannon and Mariah Carey breaking up? This is even worse than the Beyonce/Jay Z rumours.

-Speaking of Bey and Jay, FunnyorDie’s video about them is basically like every conversation I’ve had on the topic.

-Homeland’s season four trailer finds Carrie on a missions in Pakistan and Afghanistan.

-Did Madonna dump her boyfriend in the middle of their vacation?

-If you’re a norm, you better not get too close to Jerry Seinfeld. He won’t like it.

-AMC must have nothing promising on the horizon. Despite bad ratings and a total lack of buzz, they just renewed Halt & Catch Fire.

–Kim Kardashian may have made $400,000 on her “charity” eBay auctions last year.

-Here’s an extended trailer for Gotham, one of my favourite new fall shows.

–Daniel Radcliffe playing “Is This a Date?” is so, so adorable.

–Katie Holmes insists that her marriage to Tom Cruise didn’t cause her acting career to dry up. So what was it, then?

–#TweetYourAnacondaVideoReaction might just be my favourite Twitter meme in a long time. Though my reaction was more along these lines.