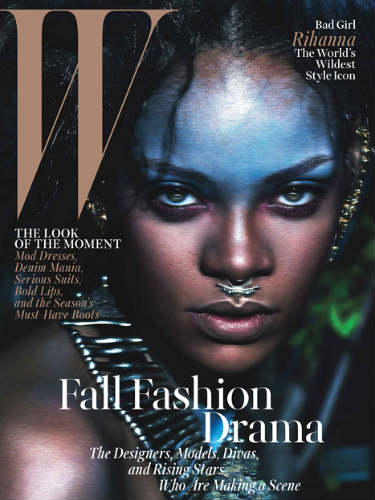 –Rihanna is channeling her wild side for W’s September cover. I love it so much, I’m willing to refrain from rolling my eyes at the news she brought her own “mood board” to the photo shoot for inspiration.

-Sorry ladies, but Idris Elba just burst your bubble by explaining the bulge in his pants in the viral photo that’s floating around is actually just a mic wire. At least he’s got a sense of humour about it.

–Kendall Jenner (who’s only 18, lest we forget) reportedly stormed out of a restaurant without paying when they refused to serve her booze. When the server followed her outside, she threw a bunch of 20s at him. So basically, she’s right on track…

-Speaking of Kendall, I had to write about her and her ilk during last night’s Teen Choice Awards, which made me feel super old and out of touch (more so than usual). Nothing really shocking happened, though Selena Gomez did cry on stage and allude to Justin Bieber when talking about dealing with lots of personal stuff lately.

-Meanwhile, Selena may have made up with Taylor Swift.

-Why didn’t Ariana Grande want to kiss Ian Somerhalder? WHAT’s WRONG WITH HER?!

-Meanwhile, Ian and Nikki Reed didn’t walk the Teen Choice carpet together — but they were spotted looking cozy.

-I can never picture Sarah Jessica Parker roughing it (mostly because of that SATC ep where she goes to Adian’s cabin and burns her legs on pie), but her Instagram feed tells a different story.

–David Duchovny and Tea Leoni have been separated since 2011 but only got around to getting a divorce now, just in time for her to start doing press for her new show Madame Secretary (which I’ve seen and didn’t hate. It’s kind of like Scandal Lite, but there’s a cute subplot about how she gets a makeover when she wants to distract the press from her political activities).

–George Clooney’s fiancee Amal Alamuddin is  teaming up with a Canadian professor on a UN commission examining possible violations of the rules of war in Gaza. Just in case you weren’t already feeling unaccomplished enough today…

-Everyone’s raving about Clive Owen‘s new show The Knick, which premiered on Friday. If you missed the first episode, the whole thing is on YouTube.

-My cousin recently introduced me to a show called The People’s Couch, which basically consists of watching other people watch TV. They should really cast Game of Thrones teen Maisie Williams and just have her watch bad ’90s sitcoms, because her Saved By The Bell reactions are great.

–Bob Odenkirk pleads his case in the first teaser for Better Call Saul. I don’t know about this, guys. I just don’t know.

-For some reason, this year’s Emmy Awards are on a Monday night (which happens to fall the day after the VMAs — are they trying to kill us?!). At least the presenter list is stacked.

-Promo for The Giver is kicking into overdrive this week. I’m still not convinced that I want to see a movie that stars both Katie Holmes and Taylor Swift (even if Meryl Streep also makes an appearance). Here’s a Swift-heavy new clip:

Cardi B Talks Farts and Family with Vogue

Paris Hilton Is Getting Married