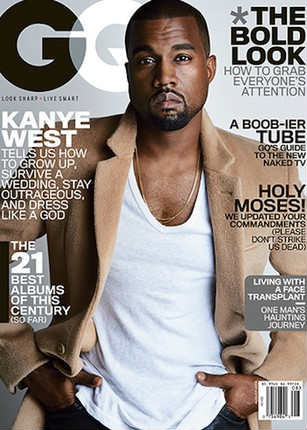 –Kanye West covers the new issue of GQ, and the accompanying interview is chock-a-block with crazy soundbites. He expresses his love for Kim through a metaphor from a Will Ferrell movie, waxes poetic about the cultural significance of Kimye, and calls himself a porcupine and blowfish. It really is…something.

–Blake Lively’s Preserve has launched! I read  the Letter From The Editor (where she starts by saying she’s “certainly no arbiter of what you should buy, wear, or eat” before claiming the site will “inspire your home, your style, and your tongue”) and I couldn’t bring myself to go on, but maybe that’s just because I’ve already fulfilled my “be a judgy bitch” quota for the day.

-The guy who plays Lafayette on True Blood just called Luke Grime out for quitting the show because he didn’t want to share any gay love scenes with him.

–Mark Ruffalo has been reunited with his lost wallet, thanks to Twitter.

-Another week, another incredible segment on John Oliver‘s show. This time, he used puppets to explain America’s broken prison system.

–Ian Somerhalder was spotted getting touchy-feely with two different women, and one of them was Nikki Reed. I dunno; he just strikes me as a touchy-feely kinda guy. I remember the last press tour he did in Toronto, my entire Facebook feed was filled with photos of him draped over all of my female media friends. It was weird.

–Mindy Kaling is using her Instagram feed to try out dresses for her new book cover — and it’s adorable.

–Jonah Hill officiated Adam Levine and Behati Prinsloo‘s weekend wedding. Is it weird none of Adam’s Voice co-judges seemed to make it?

–Beyoncé just made the Fifty Shades of Grey movie slightly more interesting by releasing the first trailer teaser on her Instagram account.

-At least Bey is still doing better than one of the original members of Destiny’s Child, who was arrested for trying to sleep in the woods.

-Meanwhile, there’s more  chatter that the end may be near for Beyoncé and Jay Z. I’m not sure why; those rumours have been plaguing them for years. Maybe the difference is now they’re widely known?

-The TCA presentation for Kevin Williamson‘s new show Stalker did not go well. First, he had to defend the show against angry critics at the panel, and then he took to Twitter to call a particular critic an “idiot.”

-In much happier TCA news, critics are RAVING over The Affair, starring Josh Jackson, Ruth Wilson, Maura Tierney and Dominic West. I was already in because it stars both Pacey AND Alice, but I’m glad it sounds so good. Here’s the trailer.

-In other promising TV news, Prison Break’s Wentworth Miller is joining the cast of The Flash, a pilot I really liked.

-Even George Clooney recognizes that he’s “marrying up” with when it comes to Amal Alamuddin.  (Sidenote: this photo of her waist freaks me out. It’s just a weird angle, right?)

–Billy Bob Thornton appeared on Oprah’s Master Class, where we learned that he wears women’s jeans from Old Navy and hates TV shows about cupcakes.

-The guy who plays Daryl on The Walking Dead just had the most Daryl-y weekend ever.

-In the most random news of the day, David Lynch designed a sportswear collection for women.

-I would really like Ethan Hawke to make me a mixed tape.

-The trailer for The Imitation Game features Keira Knightley, Benedict Cumberbatch, Matthew Goode and pretty much every other famous British person.

-Here’s the first teaser for Nightcrawler, the movie which Jake Gyllenhaal lost all that weight for. I really like all of the movie choices he’s been making lately, even if I don’t necessarily like all the movies (I’m looking at you, Enemy!).

Emma Stone Is Excited As You Are for BTS