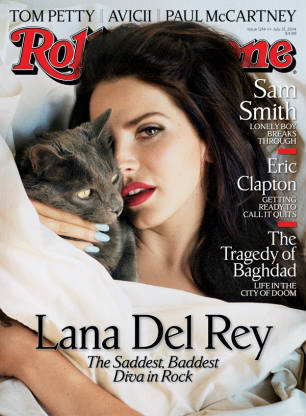 –Lana Del Rey does her mopey, put-upon thing in the new issue of Rolling Stone, saying she wishes she wasn’t on the cover and her lyrics are none of anyone’s business.  On the plus side, I guess there’s something a bit refreshing about a celebrity who seems to go out of her way to make us all really dislike her.

-Pump the brakes on all those “consciously recoupling” rumours. Gwyneth Paltrow was reportedly spotted hanging out with a “hot, young guy.”

-So Drake and Chris Brown are all buddy-buddy now? First they were spotted in the studio together, and last night they appeared in the same skit on the ESPYs. Sigh.

-Congrats to Shakira, who is reportedly pregnant again.

–Jillian Michaels opened up about leaving The Biggest Loser after seeing last season’s shockingly thin winner: “I had to take a hard look at my work. I felt ashamed.”

–Beyonce is very good at a very long list of things, but songwriting might not be one of them.

-I saw Cory Monteith‘s mom on Good Morning America today and it was sad and sweet and gut-punching.

–Jason Biggs has a long history with offending people on Twitter, but his tweet today about the Malaysian Airlines tragedy is beyond gross.

–Jared Leto was strolling around Paris today with a rose hanging out from his belt because he’s THE WORST.

-Poo! Gone Girl won’t premiere at TIFF. Though as long as This Is Where I Leave You makes it here, I’ll be happy.

-Alias star Michael Vartan is back on the market after announcing his split from his wife of three years. Poor Agent Vaughn.

-Now there are rumours that Ewan McGregor might join the second season of True Detective. Make this happen, universe!

-Yesterday on GMA, Emma Stone said working with Colin Firth was “terrible” and then she called him a “tool bag” on Letterman. Adorabs!

Grey’s Anatomy Looks To the Future