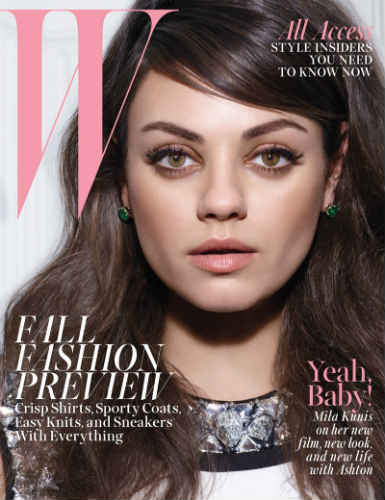 -I’m not quite sure why Mila Kunis is on the cover of W, since Jupiter Ascending got pushed to the movie wasteland that is February and she has nothing else in production (except a fetus), but at least she looks lovely.

-I really like Kristen Stewart‘s new hair. If there was ever anyone who could pull off an edgy, orange pixie, it’s her.

–Selena Gomez can no longer share anything on social media without everyone assuming it’s about Justin Bieber.

-Meanwhile, Justin has finally proven his worth as a person deserving of our attention: he Instagrammed a video of Tom Hanks in a yarmulke dancing to ‘This Is How We Do It’ (presumably from Scooter Braun’s wedding over the weekend). It’s wonderful.

-This photo of Jennifer Lawrence face-palming Emma Watson at the Dior fashion show is everything.

–J.K. Rowling released a new story featuring a 34-year-old Harry Potter. It seems to be less about extending the story than flipping the bird to tabloid-style writing, but people are still freaking out over it.

–Jimmy Fallon did a cover of “Fancy” as Neil Young (with Crosby, Stills & Nash) last night.

-The Pretty Little Liars cast vacations together, which is kinda sweet.

–Tyra Banks thinks getting plastic surgery will soon be as easy as buying Tylenol. Dare to dream!

-Summer blockbusters are tanking this year, but don’t expect the studios to change a damn thing.

-Guys, I fell down a really deep internet rabbit hole after reading this article about how Shia LaBeouf’s erratic behavior may have been caused by an MK-ULTRA programming glitch. Just do yourself a favour and walk away.

-Wee Prince George has landed his first Vanity Fair cover. And what did *you* accomplish this week??

-The BBC is begging fans not to share details from those leaked Doctor Who scripts that are floating around.

-If you need to prove the validity of karma, just look to Robin Thicke’s album sales.

-The Guardians of the Galaxy assemble in the latest extended trailer. I’ll support anything that’s soundtracked to “Cherry Bomb.”

-Here’s the first trailer for the futuristic Young Ones, starring Nicholas Hoult and Elle Fanning.