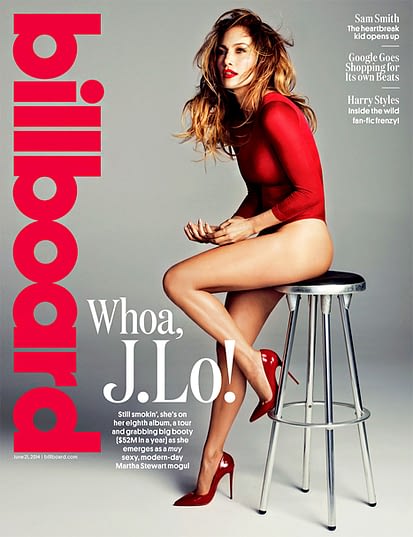 –Jennifer Lopez looks like she’s in an American Apparel ad on the cover of Billboard magazine. Still better than her World Cup outfit.

-I have very little interest in the Dumb and Dumber trailer, but from the looks of this, the press tour is going to be insane.

–Marc Anthony has been ordered to pay over $26k to his ex-wife Dayanara Torres in child support. He and Halle Berry should drown their sorrows together.

-This is hilarious: Aaron Paul‘s voice is accidentally turning on XBox One consoles around the world.

–Robert Pattinson says he’s homeless after his parents “borrowed” his house. He also says he has extraordinarily heavy saliva: “If I try and spit, I can only get it about a foot.” Still swooning, tweens?

-Sweet! Mindy Kaling has a new book coming our way called Why Not Me?.

–Uzo Aduba, a.k.a. Crazy Eyes, tries every Orange Is the New Black role. Also, I had no idea this is what she looks like IRL.

-This is awesome: George Clooney was at a family reunion and headed over to his old high school to play a game of pick up with some kids who were hanging out there.

–Madonna‘s teenage daughter Lourdes wrote about graduating from high school and regretting the fashion choices she made at 14.

-This mashup proves that Game of Thrones and The O.C. are essentially the same show. I never doubted it.

–Kit Harrington thinks it’s funny to lie to fans about who’s going to die on GoT. You know nothing, Jon Snow.

-Hulu’s got a new pilot starring Emma Roberts that’s based on the popular YA book Delirium.

-In other promising TV news, Cameron Crowe is developing a comedy for Showtime.

-Despite being rich and famous and beautiful, Lana Del Rey just told an interviewer that she wishes she “were dead already.”  Cheery!

–René Angélil has stepped down from being Celine Dion’s manager. He’s still onboard to be her husband though.

–Sarah Paulson‘s next American Horror Story character looks like it’ll be her creepiest yet.

–Jonah Hill gushes about Channing Tatum in EW’s new cover story. “If sex doesn’t come into play, I would definitely want Channing as my partner.”

-The creator of True Detective has dismissed rumours that season two’s cast will be female-led.

-Here’s another clip of Keira Knightley singing in Begin Again. I had that “Hold On” song stuck in my head for a month after seeing it.

-Speaking of songs I can’t get out of my head, here’s a new one from The New Ponographers. I missed those guys!

–Idris Elba plays a very bad man in the new No Good Deed trailer. It’s probably wrong that I still find him really hot in this, right?

Cate Blanchett Is “So F—ing Proud of Emma Watson”

Frances McDormand Dances Into Our Hearts