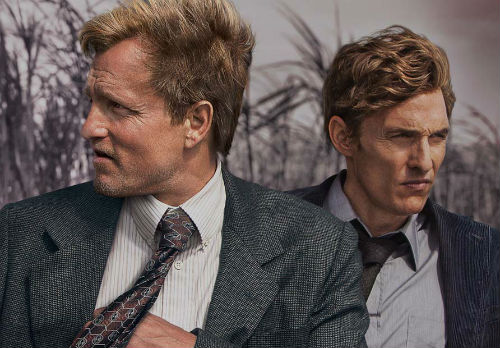 -Everything you think you know about True Detective Season 2 is wrong.

-I’m not filled with loathing and disgust when looking upon Kim Kardashian and Kanye West’s wedding photos. Clearly, I’m coming down with something.

-Meanwhile, they’re staying at Castlemartyr Resort for their honeymoon. As if the Irish haven’t suffered enough…

-More things you didn’t want to know about Kimye: Kylie Jenner and Jaden Smith were spotted making out at the wedding.

–Bill Murray crashed a bachelor party and gave an awesome speech about relationships:  “Buy a plane ticket for the two of you to travel all around the world and go to places that are hard to go to and hard to get out of, and if when you come back to JFK, when you land in JFK and you’re still in love with that person, get married at the airport.”

–Seth Rogen may have a point about the Washington Post critic making a link between his new movie and the USCB shootings, but I still hate the way he responded.

-I keep hearing people raving about this show In the Flesh. Might have to give it a whirl.

-Being friends with Miranda Kerr means you get a lot of free clothes. You’re probably plagued by insecurity and low self-esteem too, but FREE CLOTHES!

-This photo of Deryck Whibley is shockingly sad — but he’s getting better.

–Lindsay Lohan got kicked off a yacht in Cannes because karma.

-Speaking of yacht life, Justin Bieber flirted with a model after hanging out on a yacht with Gigi Hadid.

–Kate Middleton‘s bare butt was exposed during a Marilyn Monroe moment — and a German paper published a photo of it because the world is gross.

–Scarlett Johansson might play Dolly Parton? God help us all.

–Channing Tatum is so awesome, he can even make Shia LaBeouf sound like a cool guy.

-Is George Clooney having a Downton Abbey wedding? I refuse to believe this. Je refuse!

-The Before You Know It trailer gave me a lot of feels.

Noah Centineo Comes To Terms With Being an Overnight Sensation