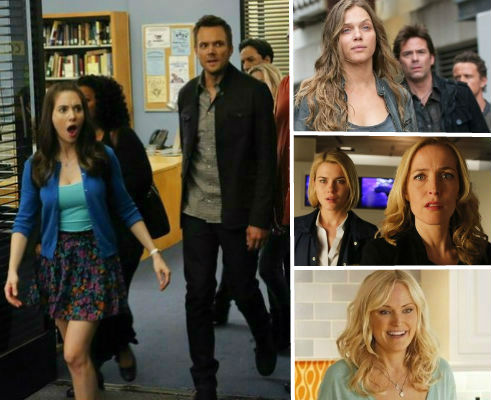 -It was a TV network bloodbath this afternoon, with NBC and ABC cancelling a bunch of shows, including Crisis, Believe, Super Fun Night, Revolution (the third JJ Abrams show to be axed this week) and a couple I actually watch: Trophy Wife, Suburgatory and — most heartbreakingly of all — Community. Now we’ll never know who the Ass Bandit is!

-Just in case you thought we were now stuck in the darkest timeline, here’s a good article on why we were lucky to get five seasons of Community in the first place.

-In really surprising news, Hannibal survived (likely because of its international funding deal, proving ratings don’t always matter when it comes to renewals).

-There’s still no word on Parenthood’s fate, and fans are freaking out. (My bet is it’s coming back, especially since NBC just wiped out its entire slate of dramas. Pay cuts are reportedly on the table though, so it all depends on if the cast is willing to play ball.)

–Justin Bieber has passive-aggressively responded to Seth Rogen‘s repeated slamming of him. It hasn’t stopped Seth at all.

–James Franco told Letterman he shared that naked selfie on Instagram because “it’s what the people want.” What people? I’m gonna need names!

-Also, James Franco may play Tommy Wiseau in movie about the making of The Room…which actually makes a lot of sense.

–Lupita Nyong’o‘s photos from inside the White House are so goddamn adorable!

–Rebel Wilson has been cast as the lead in a Private Benjamin remake, which I don’t hate.

-I keep forgetting that Paul Wesley is dating his former Vampire Diaries costar, Phoebe Tonkin. I’ve been side-eyeing her ever since she had a hissy fit over the fact that people were saying mean things about her character on The Originals on Tumblr. Maybe stop Googling your name, lady.

–Nicole Kidman has responded to the royal family’s outrage over her Grace Kelly biopic.

-I have got nothing but love for Angelina Jolie‘s crow-print dress. It’s much better than the jumpsuit-y thing she wore earlier.

–Lea Michele and Glee creator Ryan Murphy are in talks to team up for a real Funny Girl Broadway revival.

–Lady Gaga took a jab at Katy Perry for having green hair and riding a fake horse on tour.

–Sofia Coppola‘s The Little Mermaid isn’t even out yet, and already FunnyorDie is spoofing it.

–Miranda Lambert is laughing off the latest rumours of a divorce from Blake Shelton.

-Here’s a clip from Hilary Swank and Tommy Lee Jones‘ western The Homesman, which is heading to Cannes.

–Mila Kunis talked about her pregnancy on Ellen.

–Steve Carrell and Jennifer Garner play frazzled parents in the trailer for Alexander and the Terrible, Horrible, No Good, Very Bad Day.

What’s Next For Brangelina’s Custody Agreement?