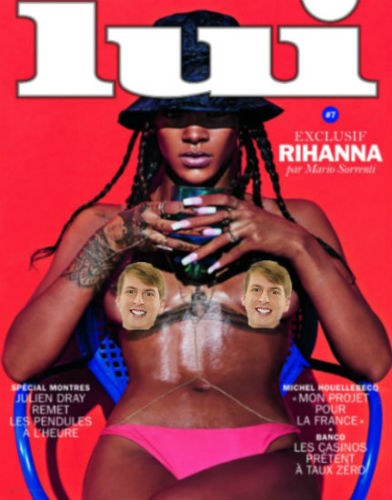 –Rihanna got in trouble with Instagram for posting her nipple-exposing cover of French magazine Lui. Who cares about the boobies? What she really needs to be scolded for is that bucket hat.

–Olivia Munn and Joel Kinnaman (my favourite celebrity couple that I kept forgetting existed) have split up.

–Zac Efron opens up about joining AA and that fight on Skid Row in The Hollywood Reporters’ new cover story. Hmmm…

–Ansel Elgort and Shailene Woodley are adorbs on the new EW cover. Practise pronouncing his name; that guy is going to be huge.

-In an upcoming episode of Late Night with Seth Meyers, Jennifer Lawrence reportedly reveals that she was so drunk at the Oscars that she puked on the stairs at Madonna’s after-party and Miley Cyrus chided her. It’s not a good sign when Miley is the sober one…

-Meanwhile, Miley‘s health crisis rages on, forcing her to reschedule another concert. At what point are we allowed to be legitimately concerned?

-Esquire wrote an article about why Anna Kendrick should take over the Late Late Show’s hosting gig, and she retweeted it and then commented on it. Does that mean she’s unofficially throwing her hat in the ring? ‘Cause she’d be awesome at it.

-I really liked this interview with Colin Hanks, especially the part where Method Man approaches him in the middle of it and he gets all flustered. “God, when Method Man says hello to you, everything goes right out the door. Sorry.”

–Patton Oswalt and Billy Eichner play a game called “Does Shakira Know What This Is?,” which is as great as it sounds.

–Andrew Garfield’s SNL promos are super promising and make me wish he’d do improv in the future.

–Matt Bomer is coming to Toronto to premiere HBO’s The Normal Heart here. Time to dig out my stalking shoes…

–Gwyneth Paltrow won’t be attending this year’s MET Gala — but because of scheduling issues, not because she totally slammed it last year.

–Beyoncé sent 90 white roses to the family of one of her biggest fans in Australia, who died of leukemia at 15.

–Naya Rivera‘s rep denied reports that she was fired from Glee over bad behavior and a feud with Lea Michele. Word has it her character is supposed to share a big number with Mercedes and Brittany in the May 13 finale, so we’ll soon see.

–Baz Luhrmann is in talks to do an Elvis biopic, because duh.

–James Franco, maybe this isn’t the best time to admit you made out with an underage Lindsay Lohan. Just sayin’.

-I’m actually really surprised that the 10-year anniversary of Mean Girls was such a big deal today. I mean, I love that movie, but wow. I also agree with this assessment that Lohan wasn’t as amazing in it as everyone lets on.

–Diane Keaton proved on Fallon last night that she has no idea how to play beer pong — and it was adorable.

-When I saw this photo of Zoe Saldana I thought “who is that Jared Leto-meets-Jesus poser she’s with?” Turns out that’s her husband.

–Lupita Nyong’o may not have made the Star Wars cut, but she’s doing ok. She’ll  be presenting at the CFDA Fashion Awards and attending the White House Correspondent’s Dinner. Now if only she could line up her next big role…

-I dig this article on why John Boyega should be the hero of the new Star Wars movie. I also like this one about whether or not a cool actor can survive the franchise with his cred in tact.

-Today, Seattle police released images of a note that Kurt Cobain kept in his wallet calling Courtney Love a “bitch with zits.”

-Chuck alum Yvonne Strahovsky is taking over your TV set, one show at a time.

–Louis CK swears he didn’t know that Letterman was actually going to retire when he made those episodes about it.

-These sketches of what Mad Men characters will look like in the ’80s are perfection. Also wonderful: someone wrote a song about every Mad Men final tracking shot.

–Vincent Kartheiser says his friends call him Fruity Lavender, which is how we all should refer to him from now on.

–Hugh Jackman is pretty sure he’s only got one more Wolverine movie in him.

-What new f**kery is this? The Amazing Spider-Man 2 has a post-credits sequence you can only watch on your phone.

–Danny Strong will be making his directorial debut with a J.D. Salinger biopic. I’m so proud of our lil’ Jonathan!

-I never really understand how fans are willing to pay over $100 for “photo opps” with stars at conventions, but all the pics with the Being Human cast from last weekend’s Calgary Expo may be changing my mind. I love how they weren’t afraid to get uber-close to the fans — or each other.

-Here’s the first trailer of Halle Berry as an astronaut in her CBS summer series.