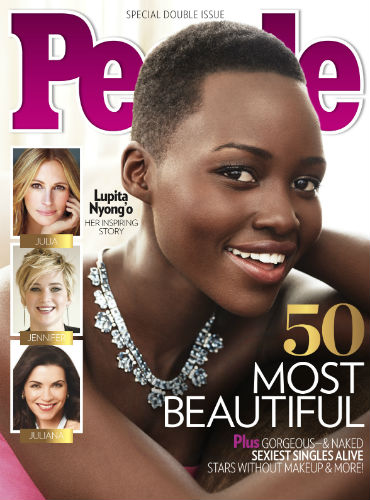 -People magazine redeemed itself by choosing Lupita Nyong’o as this year’s Most Beautiful Person. Flawless!

–Gwyneth Paltrow is having a rough week. Not only was she just dethroned by Lupita, but she also had to get a restraining order against a guy who conned his way into her London house.

–Justin Bieber wants to delay his DUI trial (he’s on vacation with his mom in Japan, after all…).

-Speaking of that Japanese vacation, Bieber had to apologize for posting a photo from his visit to a Japanese shrine honouring convicted war criminals.

–Jon Hamm just called Bieber a “shithead.” Just when I thought I couldn’t love him more…

-Congrats to Jodie Foster, who wed photographer girlfriend Alexandra Hedison. The pair have been dating since last summer.

–James Franco says that Kanye West wants him and Seth Rogen to perform “Bound 3” at the wedding (and by doing so, he might have accidentally revealed the wedding’s location).

-EW’s series finale coverage continues to impress. This week, the Friends creators look back at its ending.

-Speaking of Friends, Courteney Cox talks about her directorial debut Just Before I Go.

–Madonna voiced her opinion on some really random things for Buzzfeed.

-Belated congrats to Matt Bomer, who got secret-married three years ago.

-The ladies of Orange Is the New Black get the cover treatment in next week’s EW. Meanwhile, the show has released the first scene from the season premiere. Piper be crazy!

-Speaking of new scenes, here’s the opener of Parks and Rec’s season finale.

-I guess all that Fockers money has dried up; Teri Polo just filed for bankruptcy.

–Julia Louis-Dreyfus got naked and pretended to have sex with a clown for GQ. Yay?

-Allow Mischa Barton to introduce you to the concept of a rectangle of cleavage.

–John Malkovich is getting his pirate on in this new promo for NBC’s Crossbones. The series is from the guy who created Luther, so I’m in.

–Billy Bob Thornton says he and ex-wife Angelina Jolie “check in on each other all the time.”

-Sad: a Bachelorette contestant has died in a paragliding accident.

-I assumed this was a joke but it appears to be legit: the How I Met Your Mother spin-off cast Meg Ryan as Future Greta Gerwig. Expect lots of When Your Mother Met Harry headlines.

-News of a new Sisterhood of the Traveling Pants movie makes me happier than it should.

-“I’d like to do a job where I don’t have to tie women to beds.” Dream big, Jamie Dornan!

-I like to believe that every time Scott Speedman gets cast in a movie, an angel gets its wings.