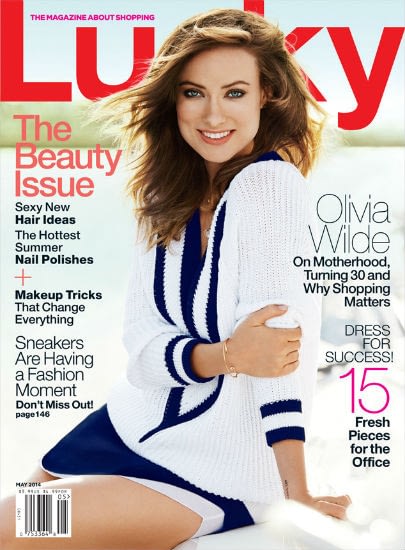 –Olivia Wilde talks about the advantages of being pregnant (“I’m like ‘double D, hello!'”) and why she’d rather play a murderer than a femme fatale in the new issue of Lucky.

-In other magazine news, Kristen Bell, Nia Long, Minnie Driver and Jenna Dewan Tatum are among the stars who stripped down for Allure’s annual naked issue.

-Congrats to Drew Barrymore, who gave birth to her second daughter today. (I LOVE the name Frankie for a girl.)

-This People article on Jessica Biel’s new restaurant is under a section called “Great Ideas,” which is clearly mislabelled.

–Chris Messina wants people to stop asking him questions that imply his character is too hot to be dating Mindy Kaling‘s character, which makes me love him.

-Speaking of Mindy, I really like this article on why she — not Lena Dunham — is the body positive icon of the moment.

–Courteney Cox nixed any talk of a Friends reunion during her visit to Letterman.

–Leonardo DiCaprio is reportedly next in line to play Steve Jobs in a film directed by Danny Boyle and written by Aaron Sorkin.

-There’s lots of headlines today about Sorkin “apologizing” for The Newsroom, but if you actually read his (very Sorkinesque) speech, you’ll realize he mostly just said he was sorry that we didn’t get it.

–Josh Charles can’t keep it together in the blooper reel from his Sorkin spoof with Amy Schumer.

–Ariana Grande went to the White House and forgot her pants. She must be so embarrassed!

-We have to wait until Christmas 2015 before we see Amy Poehler and Tina Fey‘s big screen reunion.

-Meanwhile, Amy Poehler pretended to be Pitbull on Billy on the Street, and it was amazing.

–Selena Gomez deleted all traces of Kendall and Kylie Jenner from her Instagram and unfollowed them. She also unfollowed Taylor Swift. What does it all mean, guys?!?

-Also, here’s Vanity Fair’s piece on how Katie is trying to reinvent her career.

–Lindsay Lohan‘s rep says the sketchy interview in which she supposedly drank vodka and talked about dating a married man is totally fabricated.

-Also, there’s lots of talk that she lied about the miscarriage.

-This is my journey of feels for Jaime Lannister, captured in GIFs.

-Speaking of Game of Thrones, I really liked this summary of the controversy and why THAT scene matters.

–George R.R. Martin wasn’t too impressed with that scene either.

-Here’s a behind-the-scenes video from James McAvoy‘s Details cover shoot. His look at 1:32 nearly killed me. Oh, and Fassbender‘s in there too if you’re into that sort of thing.

-The David Foster Wallace estate has come out against the biopic starring Jason Segel.

-“I’m not childless…I can have a kid any second, if I want,” says Cameron Diaz, who clearly doesn’t know what childless means.

-A lot of predictably terrible singles came out today, including Miranda Kerr’s and Corey Feldman’s. The worst might actually be Avril Lavigne’s Hello Kitty song though, which I was convinced was fake until well after the 1-minute mark.

-Speaking of terrible songs, Steve Coogan has really strong feelings about “The Lady In Red.”

-In other regrettable music news, the preview for Katy Perry’s “Birthday” video is kind of weird.

–R. Kelly‘s housekeeper sued him for sexual harassment. They reportedly settled out of court.

-Anyone else noticing that Amber Heard is starting to morph into Johnny Depp?

–Jennifer Lawrence is in that awkward stage when you’re trying to grow out your short hair and it isn’t really working.

-I can’t believe it took this long for footage of a teenaged Emma Stone singing “We Belong” and “Bitch” to see the light of day.

–Emma Thompson and Pierce Brosnan play a divorced couple who head to Paris after being screwed out of their pension by their company’s new owners in this trailer for The Love Punch.

Are Kate Hudson and Matt Bellamy On The Rocks?