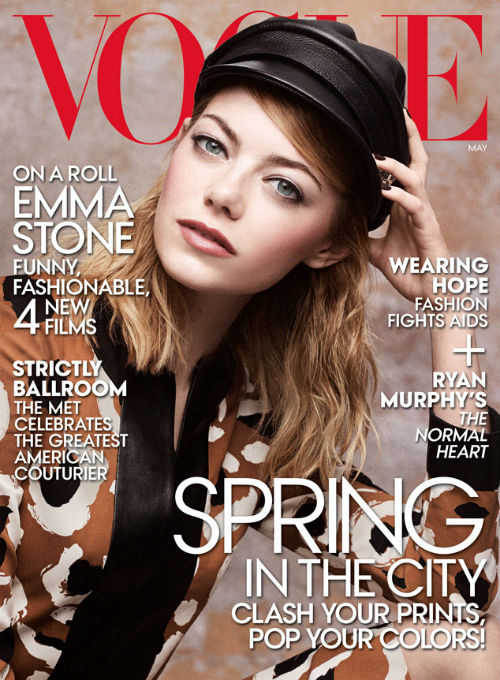 -I’m not quite sold on the styling for the cover photo, but Emma Stone looks amazing in the pages of Vogue, in which she talks about Googling herself and dating Andrew Garfield.

-Meanwhile, we’ve gotten to the giddy point of the Amazing Spider-Man 2 junket, where Emma is amusing herself by repeatedly calling out Andrew Garfield on his answers. Her ribbing of him and Jamie Foxx during the Unscripted interview was hilarious.

–Emma wants to star in the next season of True Detective with Kristin Wiig, which sounds kind of amazing.

–Lindsay Lohan‘s reality series (which won’t be renewed, not surprisingly) ended last night on a sad note. The former actress said she revealed her celebrity sex list because it was part of her AA steps,  and claimed that she missed two weeks of the show’s shoot because she’d suffered a miscarriage.

–Johnny Depp‘s new movie didn’t just belly flop at the box office; it cracked its head on the bottom of the pool and had to be dragged out unconscious by the lifeguard.

–Kristen Bell and Dax Shepard have a painting of Brad Pitt over their bed, as you do.

–Kirsten Dunst seems to think the casting couch is a myth, saying directors only hit on actresses who “court that stuff” — which seems like a nicer way of saying they’re asking for it.

–Kylie Minogue looks gorg on the cover of Vogue Australia.

-Are Richard Gere and Padma Lakshmi dating on the DL until his divorced is finalized?

–Chris Brown‘s trial on that assault charge has been delayed until later in the week.

-The Scandal bloopers made more sense than the actual finale.

-Speaking of Scandal, my Tumblr feed was filled with “bye Felicia” comments after Thursday night’s messy episodes of both Scandal and The Vampire Diaries, but that was nothing compared to the reaction to Game of Thrones’ controversial scene last night. Not only was the scene in question terrible and undid a lot of great character development, what’s worse is that the director and actors interpreted it in a way that’s totally different from how it came across onscreen.

-Not all shows sucked last week. Orphan Black’s season premiere was great! Too bad the ratings didn’t reflect the hype.

–Laura Prepon is returning to Orange is the New Black full-time because Tom Cruise can make anything happen.

–Bradley Cooper and Suki Waterhouse are still together, which means I’m going to keep confusing her for his daughter whenever I see photos of them.

–Uma Thurman was engaged to Elle Macpherson’s ex but they’ve broken it off — again.

–Tina Fey is the new face of Garnier beauty, which is lovely.

–Stella McCartney Instagrammed a photo from a recent “girls’ night out” and it pretty much featured every famous woman ever. Do you think Gwyneth Paltrow deigns to talk to Nicole Richie? Or does she just pretend she’s not there?

-Meanwhile, Gwyneth‘s GOOP is bleeding money and $1.5 million in debt.

-There are lot and lots of whispers and reports about Lea Michele and Naya Rivera being at each other’s throats on the Glee set.

-Rolling Stone’s article on the paparazzi is fantastic. I love love love that they call out Halle Berry for going to that celebrity pumpkin patch every year and Ryan Reynolds’ sponsored shots.

–More lawsuits are expected to be announced on the heels of the Bryan Singer allegations. This thing is getting messy.

-The White House won’t respond to the Justin Bieber deportation petition because of priorities ‘n stuff.

-Here are the first images of Marion Cotillard and Michael Fassbender in their new adaptation of Macbeth. I watch Fish Tank this weekend — in which Fassy plays a creepy pedo — and now I can’t really look at him.

-Speaking of Marion, here’s her trailer for The Immigrant, co-starring Joaquin Phoenix.

-Vampire Diaries Paul Wesley won’t do shirtless scenes. I wonder if his female costars get the same sort of freedom?

–Joss Whedon dropped a big gift on fans today: he released his new film In Your Eyes for only $5 on Vimeo.

-The trailer for Clint Eastwood’s Jersey Boys has arrived.

-I’m actually pretty intrigued by the new season of True Blood thanks to the latest promo, which is saying something.

-Vogue is cutting off human tire fire Terry Richardson after a model tweeted a screenshot of a text he sent her promising a Vogue photo shoot if she slept with him.

-A fake Daft Punk appeared during Arcade Fire’s final Coachella set because why not?

–Julia Roberts opened up about her half-sister’s death from an apparent overdose.

–Neil Patrick Harris had the perfect response to a fan who interrupted his Hedwig and the Angry Inch performance.

–Mark Ruffalo is heavily featured in the new trailer for The Normal Heart. No complaints here!