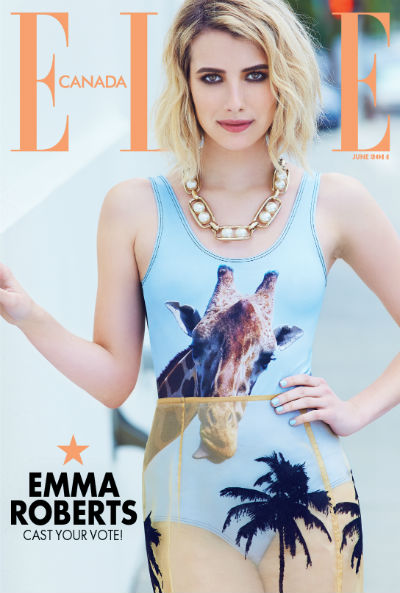 -I love the giraffe bathing suit Emma Roberts is sporting on the cover of Elle Canada— and I never thought I’d say that about a one-piece.

-Well, this is a twist: Hilary Duff and Mike Comrie have reportedly decided to call off their divorce.

–Rihanna and Drake have graduated to showing affection in public. Squee!

-Meanwhile, a new report claims Chris was the one who pushed to announce their split, while Gwyneth was fine continuing to pretend they were happy.

-Why in the world would anyone dress how Adam Levine wants them to?

–Tom Hardy manages to look both hipstery and menacing on the new cover of Esquire. I didn’t think that was possible. Bravo, sir!

–Naya Rivera and Big Sean have called off their engagement — and his people are blaming her “violent fits.” That’s convenient.

-Meanwhile, the split’s already gotten nasty, with her accusing him of stealing a Rolex.

–This kids’ song from the guys from The Walkmen and The National is way better than any kids’ song deserves to be.

–Julia Louis-Dreyfus responded to the Constitution error on  her Rolling Stone  cover — and did an admirable job of pretending not to care that people were more focused on spell-checking than looking at her naked body.

-This is a great Q&A with Jon Hamm: “People are like, ‘I want to be like Don Draper.’ You want to be a miserable drunk?”

–Jennifer Garner says her family has noticed a difference with the paps since #NoKidsPolicy became a thing.

-I love and adore the yellow dress Emma Stone wore to the Amazing Spider-Man 2 premiere.

–Emma‘s dream of meeting a Spice Girl just got a little closer to reality. She Facetimed with Mel C and it was adorable.

–Jon Stewart has nothing but love for Colbert’s next move: “He’s wonderful in Colbert Report, but he’s got gears he hasn’t even shown people yet.”

-Don’t feel bad for Craig Ferguson — he’s probably going to get rich off this anyway.

-Just when I thought I couldn’t love Anna Kendrick more, she tweets about the Step Up movies.

–Katherine Heigl sued a pharmacy chain for $6 million because they tweeted an unauthorized image of her. Is that a thing?!

-Of course Jason Segel and Katie Holmes haven’t been dating for 3 years.

-I think it’s kind of a weird fit for Amy Poehler to be shilling for Old Navy (especially since all their previous commercials feature has-beens), but the adlibs for her latest ad are pretty great.

-It’s possible that this photo of Bruce Campbell and Nathan Fillion just broke the internet.

-The final red band trailer for 22 Jump Street slays me. I’m so in with this movie!