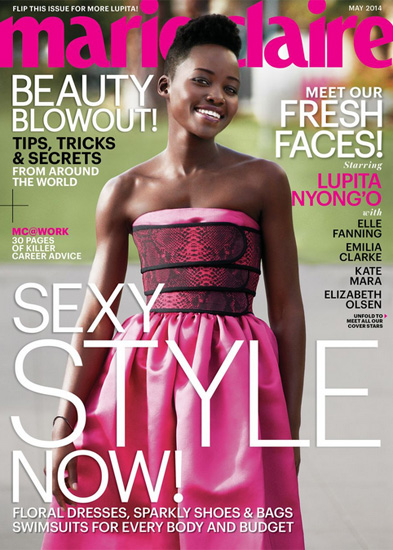 -The May issue of Marie Claire features three covers: Lupita Nyong’o, Kate Mara and Elle Fanning. Not surprisingly, Lupita‘s is the best.

–Gwyneth Paltrow is still wearing her wedding ring, according to her latest Twitter pic. Also, isn’t she supposed to be super protective of her kids’ identity? What changed?!

-I’m not sure why Julia Louis-Dreyfus needs to be naked on the cover of Rolling Stone, but at least she looks damn good at 53.

–Tina Fey and Amy Poehler set to reunite on the big screen, playing sisters in The Nest. I want to go to there.

-Meanwhile, Amy and her brother Greg talk about what it’s like to make TV in Sweden.

–Jon Hamm had a predictably adorable reaction to the viral video of his ’90s dating show appearance.

-I like the idea of Anne Hathaway performing lounge singer versions of hip hop songs but I just wish it was…actually funny.

-The trailer for American Blogger will make you angry that the Internet even exists.

-I’m glad to see Monday’s series finale of Being Human got a big ratings spike and became a trending topic on Twitter (I’m crediting at least part of that to the 9,879 tweets I posted during the episode). The finale, like the rest of the show, was uneven and flawed but damn it if I didn’t love it anyway. I don’t know what it was about this season, but it hit me right in the feels.

-Also, I’m hoping Sam Witwer goes on to be a huge star. No one does tortured souls like him.

–Seth Rogen says he has no idea if James Franco‘s Instagram proposition is real: “I am afraid to ask!”

-Meanwhile, Seth’s SNL promos are hilarious. Maybe that’s why they let him go on for more than 5 minutes.

–Amanda Bynes‘s lawyer is denying reports that she has schizophrenia, while her mother says marijuana is to blame for her odd behavior.

-Lindsay Lohan got emotional when Oprah surprised her with a phone call during her Letterman appearance.

-The overall trend is not going away anytime soon. Sigh.

-Not surprising but still great: Game of Thrones has been renewed for two more seasons.

-I’m not going to Coachella this year for the first time in like, 10 years (sad face) but I can stream it online, which is almost the same thing. All the great music, none of the crazy Twitter people grilling me about Robert Pattinson sightings…

-The new trailer for Mad Men is psychedelic and weird.

-I didn’t watch Marvel’s Agents of SHIELD this week, but apparently they used the plot twist of Captain America to change the show in a big way. It didn’t do much for the ratings, though.

–This article about Buffy is so good that Buffy herself tweeted about it.

-Here’s the first teaser for Zach Braff‘s Kickstarted movie Wish I Was Here. Of course it focuses more on a song from The Shins then actual, like, dialogue.

-The new NSFW red-band trailer for Neighbors kind of makes me want to see it.