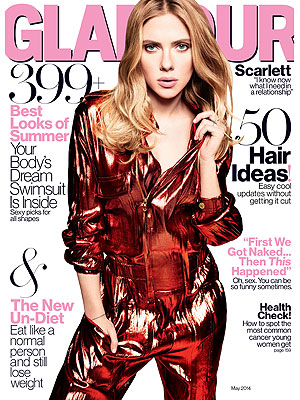 Scarlett Johansson has once again gone on the record to vent her frustration about her “ScarJo” nickname. “It’s lazy and flippant. And there’s something kind of violent about it.” Yes sweetie, your life is clearly an uphill battle of Sisyphean proportions.

–Jimmy Kimmel is pretty much the only person who wants to make out with Johnny Depp these days.

-Congrats to Tom Ford, who secretly wed his partner of 27 years.

-Photographers covering a Lady Gaga event reportedly had to agree to give Gaga final approval before any of their images could be released. I’m not sure she’s understanding the “candid” part of candid photos.

–Marisa Tomei lets her neighbors watch her TV when she’s not home because she’s cool like that.

-Why isn’t Anthony Mackie a huge star already? Look how goddamn charming he was on Fallon. (Also, I wish every star would narrate their talk show clips like him. “That’s not me. Fast forward!”)

-Speaking of charming late-night appearances, Mindy Kaling was pretty great on Chelsea Lately last night, where she debuted the “summer bangs”she got to look like part of Pharrell’s crew.

–Blake Lively and Ryan Reynolds amped up their cute factor with hats.

-Poor Rob Lowe is complaining about how hard it is to be so very pretty. Let’s hope he somehow finds the will to carry on.

-Just because Jessie J has dated a girl, don’t call her bisexual. She won’t like it.

-Contrary to reports, Kate Mulgrew not a crackpot who thinks the sun revolves around the Earth, and anyone who says otherwise is getting a tampon sandwich.

-Trophy Wife’s Diane is one very large wine glass away from becoming Olivia Pope in this Scandal spoof.

-I don’t hate the piano dress Lindsay Lohan wore on Letterman but to be fair, I’ve taken a stupid amount of Nyquil today so my judgement may be impaired.

–Jennie Garth really does not enjoy waiting in line at nightclubs with the rest of the unwashed masses.

–Paul Rudd appeared on Billy on the Street and asked New Yorkers if they would sleep with him for a dollar.

Tiffany Haddish Weighs in on Game of Thrones

Samira Wiley on Her Instagram Friendship with Margaret Atwood

Sophie Turner Thought Joe Jonas Would “Be a Dick”