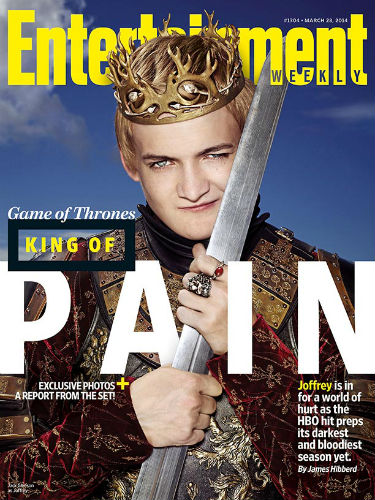 -That smug bastard Joffrey covers EW’s new Game of Thrones issue, while the final season four trailer has been released. (Jaime and Brienne finally get lines in this one!)

-Meanwhile, the cast reunited in NYC for the GoT premiere.

–George Clooney and his new girlfriend Amal Alamuddin are back in New York after their African safari / Seychelles vacation / totally staged photo op.

-I can totally relate to the way Mindy Kaling handles wine tastings: “I smell…alcohol-y smells.”

-Instead of running away in terror, the Parks and Rec cast gave their number one fan a standing ovation at PaleyFest because they’re all menschs.

-In news that should surprise no one, The Bachelor Canada’s Brad Smith and Bianka Kamber have ended their engagement.

–Jamie Lynn Spears‘ mom wore a bridal-ish dress to her daughter’s ceremony, which is a total wedding foul.

-Here’s the video of Gwyneth Paltrow‘s full “Happy” performance from last night’s Glee. Also, is it just me, or did Fox do zero promotion about that being the show’s 100th episode?

-This is an odd career choice: Chris Martin has joined The Voice as an adviser and mentor to the current contestants.

–Lily Tomlin just joined a new Netflix comedy from the creator of Friends and I want it in my eyeballs RIGHT NOW!

-I’m still not feeling the Amazing Spider-Man 2 based on the latest trailer, but the cast was on GMA this morning to introduce the trailer and they were acting totally loopy, so that’s fun.

-I wasn’t a fan of Shailene‘s Divergent premiere dress, but she quickly changed into overalls for the after-party, which is even worse.  Why are overalls suddenly everywhere?! Stop it, fashion people.

-Speaking of overalls, the Buffy cast started tweeting about them being in style again and it gave me so many feels!

-God bless Gawker for pointing out that Shailene Woodley is like if a female Matthew McConaughey came to life.

-“I feel like I just learned how to brush my hair like last week!” says Mary-Kate Olsen, who’s clearly not a real person.

–Lena Dunham and Jimmy Fallon reminisced about working at video rental stores when they were young before teaming up with Hugh Dancy and ?uestlove to play Pyramid.

–Gerard Butler managed to find and crash the one bachelorette party in the world that wasn’t attended by women who think he’s gross.

-It might be a trainwreck, but I’m all in with Fargo thanks to this new trailer.

–Angus T. Jones says he was a “paid hypocrite” during his time on Two and a Half Men. The cost of said hypocrisy? $350k per episode.

–Miley Cyrus did karaoke to “Baby Got Back.” Fun story: a couple of Christmases ago my family was at midnight mass and the book said “…and now the congregation will sing an appropriate hymn of praise” and at the exact same time my brother and I started humming “Baby Got Back” and totally lost it. Church is weird.

-Grantland digs deeper into the “secret occult history of the U.S. transportation system” that will be the focus of True Detective’s next season.

-More sadness surrounding L’Wren Scott: a close friend says she was going to announce her business closure on Wednesday.

-Meanwhile, Mick Jagger posted a heartfelt message about L’Wren Scott on his website.

-Here’s another dreamy Mad Men teaser that tells us nothing.

–Casey Wilson revealed her favourite Happy Endings moments and it made me want to rewatch the whole damn thing.

-Another Godzilla trailer, another realization that Bryan Cranston can make anything watchable.

-I liked this “10 things I learned from the Veronica Mars movie” article.

-Meanwhile, Judd Apatow isn’t planning to jump on the reunion bandwagon with his beloved cult classic. “Freaks & Geeks would probably have a really sad reunion show. It would have to happen at a prison or at a hospital. We didn’t think those people would do very well.”

-Justin Bieber‘s DUI defense is that he wasn’t wasted, he was just nursing a fractured foot.  Sure thing, hon.

-The trailer for Meryl Streep and Jeff Bridges‘s The Giver is finally here. Neither Taylor Swift or Katie Holmes are given any lines, which seems like the right choice.

Is Katie Holmes Getting Too Much Love?