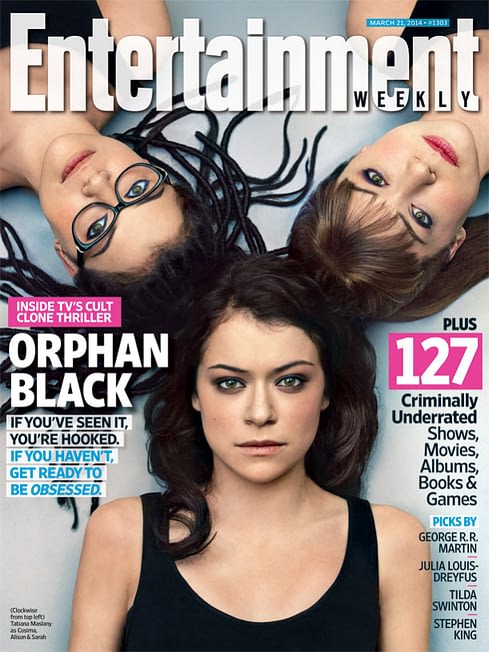 -How awesome is it that Orphan Black’s Tatiana Maslany is on the cover of Entertainment Weekly? (Answer: very.)

-I really liked the Vogue video interview with Sarah Jessica Parker. Her house is lovely!

-According to someone in the audience at a recent 2 Broke Girls taping, Lindsay Lohan had a really hard time getting through her scenes.

-Also, this may be a list of all of Lindsay Lohan’s celebrity conquests. Jamie Dornan, say it ain’t so!!

–Angelina Jolie told EW that she is planning to have another surgery to lower her cancer risk.

-Ugh. I hate the news that Chris Pine was arrested for suspicion of DUI in New Zealand.

-Following that fling with her Smash director, Katherine McPhee has reunited with her husband.

-In news that should surprise no one, Taylor Swift is not happy with Selena Gomez for reuniting with Justin Bieber — and for dragging Ed Sheeran into the fray.

-Meanwhile, Bieber has been named the most overexposed celebrity by Forbes.

–Kylie Minogue took BuzzFeed’s “Which Kylie Are You?” quiz and the GIFs of her doing it are adorable!

-Speaking of Buzzfeed quizes, which Veronica Mars character are you? I got Logan, which I guess means I need to start organizing bum fights?

-The guy who plays Keith got Keith, so that’s good.

-Meanwhile, FunnyorDie released a spoof on how the Veronica Mars movie will incorporate the Kickstarter cameos.

-One of the original actors on The Originals is leaving the show.

-Here’s the backstory to that Obama/Zach Galifianakis Funny or Die video.

-Uh oh. Did Jared Leto introduce Lupita Nyong’o to the grossness that is his friend Terry Richardson?

–Emma Stone and Andrew Garfield are trying to out-kiss Kristen Dunst and Tobey Maguire in the Spider-Man movies.

–Chelsea Handler had a tense interview with Piers Morgan, telling him “I’m not racist.” Things went a lot smoother when Gwyneth Paltrow interviewed her.

-Here’s the cast of How I Met Your Mother talking about the show’s end on Inside the Actor’s Studio.

-In other sitcom news, we’ll never, ever get rid of The Big Bang Theory.

-Besides her Idol appearance and this clip of her making fun of “Puffy,” I’m starting to be won over by Jennifer Lopez. What?

-In this SNL web exclusive, Lena Dunham and the ladies of SNL try to dance like Beyonce.

-Yay! New photos from Orange is the New Black!

-The Bachelor’s Juan Pablo made a baffling video montage for the show’s winner, Nikki, I guess to prove that he loves her without actually having to say it. That guy is so weird, even Dancing with the Stars didn’t want him.

–Chris Evans has decided that he does not like the taste of his own foot and has taken it out of his mouth.

-Ugh, really? Rooney Mara may play Tiger Lily in Warner Bros’ Pan, even though she’s the whitest person ever.

-Did you ever think, “why the hell would True Detective cast Elisabeth Reaser and not give her any lines?” Well, they actually did — they were just cut. Here’s her breakup scene with Rust.

–Bryan Cranston showed up to support Aaron Paul at his Need for Speed premiere, because they’re best friends foreva!

–Ed Westwick could not look less like Chuck Bass in this photo.

-It’s weird to watch Abigail Breslin‘s Perfect Sisters trailer because this was a huge and terrible story that dominated the news in our city for a long time, but here it is.