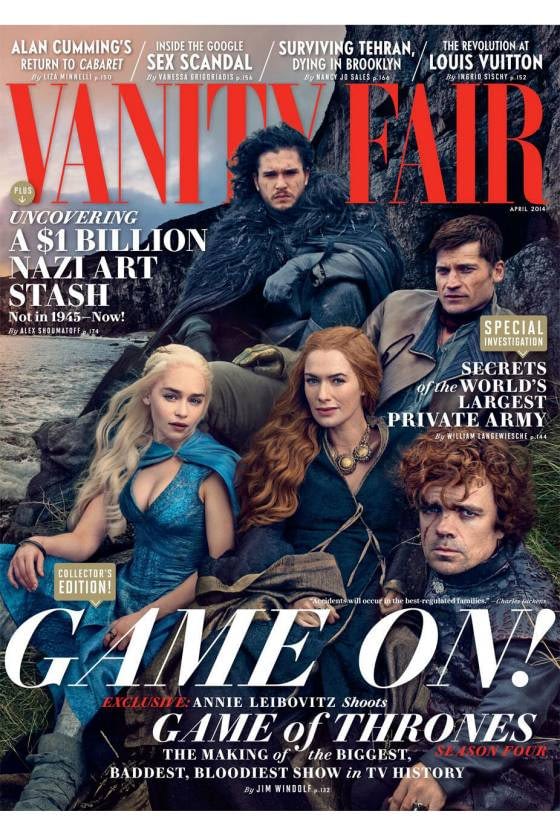 -The cast of Game of Thrones (some of them, anyway) made it on the new cover of Vanity Fair. The inside photo spread is more promising: Brienne shows up in the behind-the-scenes video posing with the Lannister clan, while Ygritte is photographed with Jon Snow.

-Also, the guy who plays Hodor has been waiting to come out for a while, but no one’s asked him.

–President Obama is already binging on the new season of GoT, because that job clearly has some perks.

-Everyone’s making fun of Justin Bieber and Selena Gomez‘s cheezy dance video. It reminds me like a low-rent version of my favourite scene from Another Cinderella Story (which I probably shouldn’t admit that I’ve seen, let alone that I have favourite parts…).

-Meanwhile, Bieber made a surprise appearance at SXSW, where Selena was spotted backstage. He then accompanied her to her first post-rehab performance (though he stayed in the tour bus).

-Something tells me partying with Leonardo DiCaprio is not the best way for Robin Thicke to win back Paula Patton‘s trust.

-Hollywood has been trying to remake Fletch forever, with Ben Affleck, Ryan Reynolds, Jason Lee, Zach Braff and Joshua Jackson all attached at one point or another. Now, it looks like Jason Sudeikis might be the one to fill Chevy Chase’s shoes.

–Jennifer Aniston and Justin Theroux ate lunch together, as engaged people are wont to do.

-Speaking of engaged people who also happen to enjoy lunch, Mila Kunis and Ashton Kutcher are all about the up tops.

–Lupita Nyong’o and Jared Leto are taking selfies together in Paris.

–Lorde has no time for your casual homophobia.  She does have time, however, to team up with MAC for a gothy new makeup line.

-Meanwhile, I love this CHVRCHES cover of her song “Team.”

-In a new video for Mashable, Kevin Bacon hilariously tries to explain the 1980’s to millennials. “You people will never know the comfort of parachute pants!”

-Speaking of hilarious, President Obama was great on Between Two Ferns with Zach Galifianakis.

–Mindy Kaling doesn’t take kindly to accusations her show doesn’t have enough diversity, telling a SXSW audience, “I look at shows on TV, and this is going to just seem defensive, but I’m just gonna say it: I’m a f–king Indian woman who has her own f–king network television show, OK?”

–Conan O’Brien felt the wrath of Alex Trebek this week.

-Speaking of late night fun, I wanted to like Jimmy Kimmel and Seth Rogen‘s True Detective spoof more than I did.

–Skrillex just pulled a Beyonce and dropped a surprise album.

-In other Kristen Bell fashion news, she revealed that she peed in a jar while wearing her Oscar dress.

-Now you can watch the first eight minutes of the Veronica Mars movie!

-The fact that Josh Duhamel just signed on to play the lead of Breaking Bad creator Vince Gilligan‘s new series makes me way less interested than I was yesterday.

-For most actors, starring in a Twilight movie would be their most embarrassing career move. Cam Gigandet is not most actors.

-Another day, another Drake and Rihanna sighting.

-What happens when the mad geniuses behind Arrested Development and Community join forces? We’re about to find out.

-If you don’t want to watch Lindsay Lohan‘s reality show, you can just stick with this supercut of her yelling at people on it.

–Olivia Munn and Eric Bana fight demons in the creepy new trailer for Deliver Us From Evil.

-The No God, No Master trailer has landed. I’ve got nothing but love for Sam Witwer, so I’m in.

–Kim Kardashian is fine after being involved in a fender bender.

-Also, it’s probably not a good sign when even People.com is making fun of Kim’s gym makeup.

Oliva Wilde’s On Her ‘No Assholes On Set’ Policy