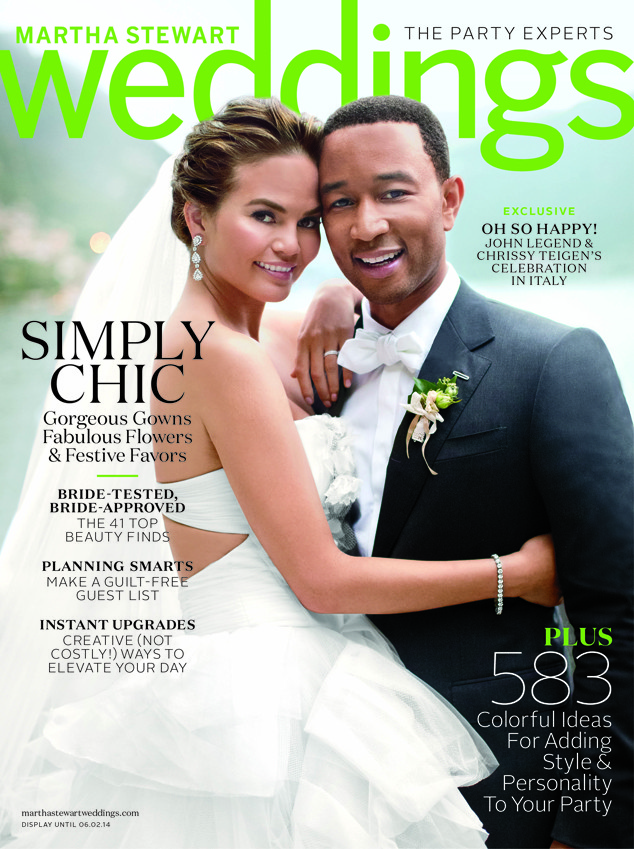 –Chrissy Teigen and John Legend are showing off their wedding photos in the new issue of Martha Stewart Weddings.

–Kristen Bell and Dax Shepard scored a big victory in their #pedorazzi campaign today: both People magazine and JustJared have announced they’ll stop publishing paparazzi photos of kids. It’s all well and good, but People also has an entire (and heavily trafficked) section on celebrity babies. They make it clear in their letter that they only use “sanctioned photos,” but you see how the general public gets confused. Unless stars stop using their kids as props, this issue won’t go away. People even calls it out, saying “there’s always the tough balancing act we face when dealing with stars who exploit their children one day, and complain about loss of privacy the next.”

-Meanwhile, if Jessica Simpson ever complains about her lack of privacy, let’s all remind her about this photo she just instagrammed.

-Speaking of oversharing, Michelle Rodriguez and the guy who plays Caleb on Pretty Little Liars both instagrammed nude photos from their vacations.

-The fact that Alec Baldwin followed up yesterday’s “Goodbye, Public Life” cover story with an announcement that he’ll be on an upcoming episode of Law & Order: SVU could not be more hilarious.

–Robin Thicke reportedly flew  to Vancouver last weekend to try to save his marriage when he found out Paula Patton was leaving him. She’ll be back in the spotlight this weekend when she presents at the Spirit Awards.

-This should be interesting: Lena Dunham will host SNL on March 8.

-Oscar voting closes at 5 p.m. PST tonight, and The Hollywood Reporter has a great analysis of this week’s last-minute desperate push for voter love.

–Jennifer Lawrence hasn’t had time to campaign because she’s stuck on the Mocking Jay set, so the New York Times is doing it for her.

-Being Human was cancelled today. I never watched it, but it employed a lot of people in Montreal.

–Seth Meyers‘ Late Night debut may have been a rather muted affair, but Amy Poehler looked AMAZING.

-That’s not the only celebrity Drake’s been spotted with. He also had dinner with Rihanna in Paris.

-In other dining companion news, George Clooney and Matt Damon met up for dinner in Milan.

-There ain’t no shade like fashion shade. Giorgio Armani is not happy with Anna Wintour after she skipped his Milan show and he doesn’t care who knows it.

-The latest Game of Thrones teaser is all about Tyrion — and things aren’t looking too promising for him.

-The Voice came back last night to huge ratings.

-Do you want to watch a video of a half-naked Scott Foley lounging around in a towel? Yeah, ya do. –

-Some actor named Luke Bracey will play Keanu Reeves‘ role in the Point Break remake and no doubt fail miserably.

-It looks like Scott Speedman is still dating the French girl from Last Resort. Sigh.

–Beyoncé gets all NSFW with Jay Z in her new video for “Partition.”

-In other new video news, Coldplay’s latest is as depressing as you’d expect. Haim also dropped a new video.

–Angelina Jolie was on the Today Show promoting Unbroken with the 97-year-old man the movie is based on – who turned out to be her neighbour.

–Gabrielle Union appeared on The View yesterday and very bravely talked about how she took back control of her life after being held up at gunpoint and raped during her summer job at Payless when she was just 19.

–Salma Hayek‘s brother has been hospitalized after being involved in a fatal car crash.

-I stopped watching Hannibal because it’s soo very dark and disturbing, but I do think it’s surprisingly great for network TV and if I wasn’t such a wuss I’d be all over it. You can watch the season premiere’s brutal opening fight scene here.

-I’m not too much of a wuss to watch The Americans, which returns tomorrow night and is getting rave reviews.

Gillian Anderson Gets Feisty for The Fall