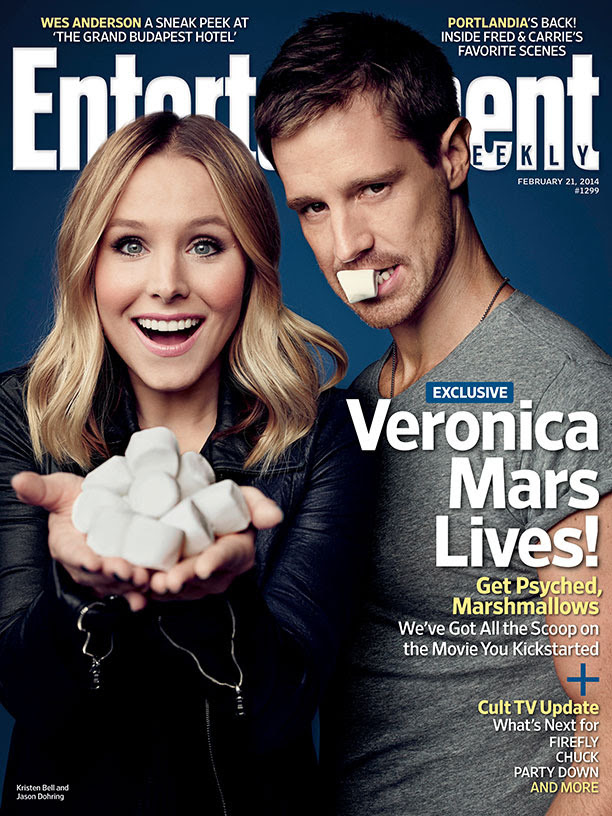 -Celebrate, marshmallows! The latest Entertainment Weekly cover is all about Veronica Mars. Also, the behind-the-scenes video of Kristen Bell and Jason Dohring‘s cover shoot gave me all the squees. All of them. They’re gone. I’ve used them all up.

–Drake has been saying a lot of things today that make me think maybe it’s time for him to go away for a lil’ bit. He thought Macklemore‘s post-Grammy text to Kendrick Lamar was “wack as fuck” (which I agreed with up until he said he wanted a text, too). Then he said that he was “disgusted” that Rolling Stone replaced his cover story with one about Philip Seymour Hoffman. And now he says he’s quitting magazine interviews altogether.

–Rihanna has filed a lawsuit against her accountant, who she says lost her boatloads of money with his crappy advice.

–Lindsay Lohan went to karaoke and reminded us that she’s not just a broken puddle of regret and spent youth.

-Is Jude Law back together with Ruth Wilson? He should be. Alice rocks!

-Even Gwyneth Paltrow and Reese Witherspoon aren’t above duckface selfies.

–Jared Leto attended NYFW, where he was shot down by models who wouldn’t give him their number.

–Abbie Cornish is recording a rap album. For reals.

–Prince William went on a “boar-hunting vacation” in Spain (with an ex-girlfriend!) and then attended a conference on illegal wildlife hunting trade, cause that’s how royals roll.

-The “blooper reel” for the LEGO movie is pretty damn hilarious.

–Lil Kim  is pregnant. I’m guessing the kid won’t end up looking like her.

-I don’t know why Mariah Carey and Nick Cannon are recreating scenes from Mean Girl, but I’ll take it.

-Also, if you’re a nanny you probably don’t want Mariah as your boss.

–Here’s a preview of the Parenthood/Friday Night Lights webisode crossover. She calls him Lance, which makes my life!

–Aaron Paul visited the Cheers bar, where he was spotting giving out hugs to people who approached him. Get thee to Boston!

–Ellen DeGeneres is doing a post-Oscars show, if you’re into that sort of thing.

–Kanye West went to a party and didn’t seem to have a very good time.

-No surprises here: The CW has already renewed Arrow, Supernatural, The Originals and The Vampire Diaries.

–Ashley Olsen is reportedly dating the director of Moneyball.

-Does the world really need another Katherine Heigl rom-com? She seems to think so, judging by her new crowd-funding project.

-Another day, another appearance at NYFW by Blake Lively.

–Leonardo Dicaprio gets all broody for the cover of Variety.

-Here’s the first trailer for Tammy, starring Melissa McCarthy and directed by her husband.

Charlize Theron Gets Tough in W

Chris Pratt Opens Up on His Father’s Death