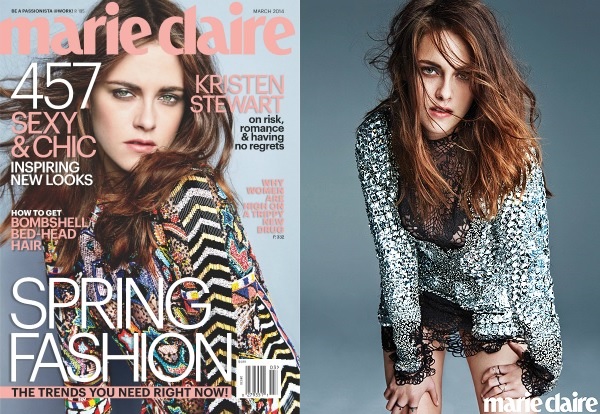 -There’s no way Kristen Stewart isn’t just trolling us all with her new Marie Claire cover story. No. Way. Not only does she willingly share that horrific, much-talked about poem that everyone’s making fun of today, she also spews a bunch of equally ridiculous quotes. (The best  is when she discusses her regret about not going to college: “If I were as smart as [director Tim Blake Nelson] is, I could have the most killer conversation with anyone because I know I have it in me.” It reminds me of that quote in Pride and Prejudice, when Lady Catherine boasts of piano playing: “If I had ever learnt, I should have been a great proficient.”)  Seriously, no one can be this dense, right? RIGHT?!

-Meanwhile, a new report claims Rupert Sanders is still in love with Kristen Stewart. A quick look at her poetry should cure him right up!

-Not-famous Shia LaBeouf has taken his apology tour to its logical next step: an art exhibit in which he lets people stare at him while he breaks down in tears.

–Gabrielle Union makes it clear that she’ll be insisting on a prenup before her upcoming wedding.

-I’m glad Wolf is getting released on VOD. I’ve heard nothing but raves about that movie for months.

–Jesse Eisenberg is even more of a smarty pants than we knew. A book of his short stories will be published next year.

-Speaking of Game of Thrones, one million people voted Emilia Clarke the world’s most desirable woman.

-It’s adorable that people think CNN just leaked the Best Actor winner. The final ballots don’t even get mailed out until Friday (which is why there’s been a flurry of appearances by nominees this week. Gotta stay fresh in voters’ minds!).

-Speaking of campaigning, Jared Leto is crushing it.

-In other nominee appearance news, here’s the 2014 Oscar class photo.

–Nicole Kidman covers the new issue of InStyle, in which she gets all gushy about Keith Urban: “For every single night he’s away, he leaves me a love letter. Every single night of our relationship.”  (Maybe he learned his lesson from that old leaked cellphone convo between Nicole and Tom Cruise, in which she berated her then-hubby for not sending her a gift or a note on her first day shooting Practical Magic.)

–Leonardo DiCaprio revealed he was once in the running to star in Moulin Rouge.

-The cast of Frozen got together to perform live for the first (and probably only) time ever last night. I can’t wait for Idina Menzel to kill it when she sings “Let It Go” at the Oscars.

-50/50’s Joseph Gordon-Levitt and Seth Rogen are teaming up again for a new Christmas movie.

-Is Charlize Theron mellowing Sean Penn out? Perhaps his tying-up-girlfriends-and-holding-them-hostage days are behind him?

–Will Ferrell and Red Hot Chili Pepper Chad Smith’s hilarious public feud will end the only way it can: in a drum battle.

-Here’s the six-minute tracking shot from Sunday night’s True Detective that everyone’s losing their poo over. It’s all very impressive and everything but I just can’t shake the feeling that the show isn’t actually, you know, good.

-Gross: a guy from Burn Notice reportedly left his pregnant wife for a 22-year-old.

-EW has a pretty good roundup of every network show’s chances for renewal/cancellation.

-A Long Way Down premiered at the Berlin Film Festival, and it’s getting very mixed reviews (some liked it, some hated it, and some really hated it). I’m choosing not to care.

-Sorry, Neil Patrick Harris. Hugh Jackman will return to take over hosting duties for the Tonys this year.

–Kate Middleton recycled another dress to the collective consternation of the internet. At least everyone seems to be pleased by her giant necklace.

–Scarlett Johansson plays a sexy alien in the new Under The Skin trailer, which wasn’t well-received at TIFF.