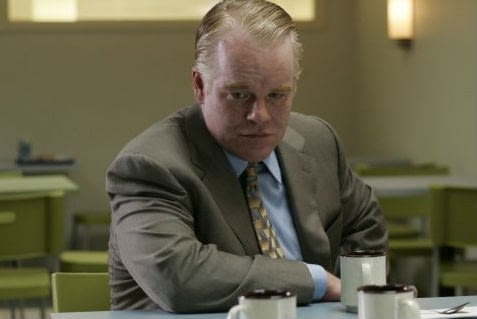 -Continuing this bummer theme, Amy Adams broke down in sobs when asked about Philip Seymour Hoffman during her taping of Inside the Actor’s Studio.

-God bless Vulture for creating a timeline of George Clooney‘s history of pranking.

-I’ve been totally normally taping all of Clooney‘s talk show appearances this week, and he just keeps telling same two stories over and over (incredibly charmingly, but still). So it’s nice that Matt Damon took over last night to read Tina Fey and Amy Poehler’s letters to Clooney on Letterman.

-The L.A. County D.A. is recommending Justin Bieber be prosecuted for felony vandalism in that egging incident.

-Now that Dakota Johnson is the star of Fifty Shades of Grey, do you think she’s now stuck with a decade of cheesy/sexy posing?

–Jay Leno went out not with a bang but with a whisper last night. At least the ratings for his final episode were good — not good as Conan‘s NBC exit, though.

-I love this look on Diane Kruger. I’m nabbing myself some of those Peter Pilotto for Target clothes this weekend if it’s the last thing I do!

-Her boyfriend is looking mighty fine himself.

–Jake and Maggie Gyllenhaal attended a Pussy Riot party in NYC last night because they’re awesome like that.

-Aca-awesom! Anna Kendrick and Rebel Wilson have officially signed on for Pitch Perfect 2.

–Olivia Wilde wore some perfectly normal clothes and got called out for her “hipster pregnant look” because people don’t know how to use words.

-I loved her on Roswell and I loved her on Girls, so I’m happy Shiri Appleby landed a new role. It weirdly sounds like that made-for-TV movie about a Bachelor rip-off starring Bradley Cooper and Jason Priestley. (Seek it out — it’s a charm-bomb!)

–Blake Lively sat down for a three-hour meal, making her my new favourite person.

–Joe Jonas is covering New York Fashion Week for The Cut. Wait, what??

–David Duchovny and Hope Davis star in the new Louder Than Words trailer.