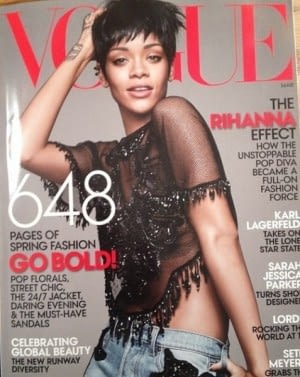 –Rihanna looks fresh-faced and flirty on what is reportedly the leaked cover of the March edition of Vogue. Somewhere out there, Kanye West is throwing a temper tantrum.

-In other Vogue cover news, Miley Cyrus posed topless for the German edition.

–George Clooney has already executed part one of his revenge plan against Amy Poehler and Tina Fey — and he pulled in an unsuspecting Matt Damon.

–Kelly Ripa lost a bet and had to host this morning’s show makeup-free. Unfortunately, it was the day George Clooney stopped by.

–Lady Gaga covers the new issue of Harper’s Bazaar, in which she talked about her recent battle with depression.

–Sandra Bullock got all choked up when visiting Jay Leno‘s show for the final time last night.

-Expect the LEGO movie to kill it at the box office this weekend.

–Emma Watson talks about being socially awkward in the new issue of Wonderland. She’s also been revealed to be quite the painter.

-NBC canceled The Michael J. Fox Show. Well, they pulled it from the schedule but haven’t made the official cancellation announcement yet so the creator is still holding out hope, but it’s 99.9% done.

-Someone stole the lock Parks and Recreation’s Ben and Leslie added to the Pont Neuf bridge in Paris.  I swear, it wasn’t me!

–Evangeline Lilly is in talks to play the female lead in Marvel’s Ant-Man.

–Tom Cruise is getting sued for one billion dollars. For reals.

–Pharrell’s hat is back!

-Despite her fight with Vanity Fair about that “epic takedown,” Gwyneth Paltrow is still getting an invite to their Oscar party.

–Ashton Kutcher wants Charlie Sheen to lay off him on Twitter already. Sheen responded by apologizing — and then threatened him.

-The first trailer for Simon Pegg‘s Hector and the Search for Happiness looks great — even if it is reminding everyone a bit too much of The Secret Life of Walter Mitty.