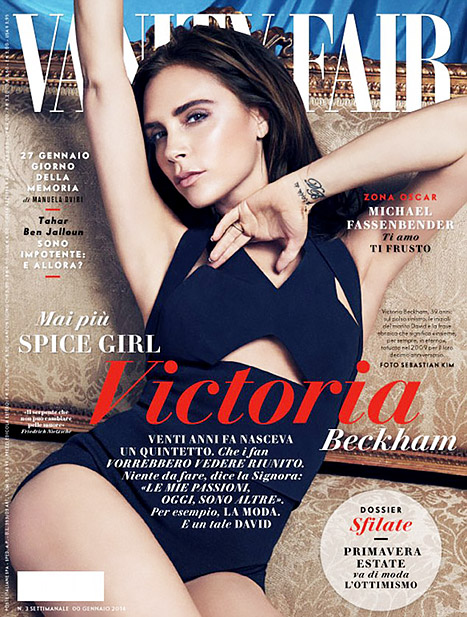 -It’s no Vogue US, but Victoria Beckham looks great on the cover of Vanity Fair, where she definitively rules out a Spice Girls reunion.

–Beyoncé and Jay Z will be performing together at Sunday’s Grammys. Check your TV’s warranty to make sure it can withstand that level of hotness before tuning in.

–Shia LaBeouf keeps tweeting “I AM NOT FAMOUS ANYMORE” over and over. Wishful thinking doesn’t make it so, buddy. Trust me, I’ve been wishing it since I saw Indiana Jones and the Kingdom of the Crystal Skull.

–Justin Bieber continues to be a shining example of maturity and grace. He marked his name in the snow with pee. And ladies, he’s single!

-Speaking of total charm-bombs, Robin Thicke got grindy-close to a woman who is not his wife at a strip club in Paris.

-There seems to be a bit of a backlash building against Jennifer Lawrence (I know — people are monsters!) but this hilarious video of a stupid reporter spoiling Homeland for her should win everyone back. It’s good that Damian Lewis was there to comfort her.

–Katy Perry says she wants to ask President Obama about the existence of aliens, which everyone’s mocking as if that’s not the very first thing they’d do too.

–Jamie Dornan reportedly keeps trying to stop Fifty Shades costar Dakota Johnson from talking to the crew, which sounds like some method-y “process” bullshit but I’ll allow it because I love him.

-Just in case Prince Harry isn’t already your pretend BFF, read this story about him drinking champagne out of a prosthetic limb and telling filthy jokes on his South Pole trek.

-This monkey couldn’t stop touching Zac Efron. This monkey is living our dreams.

-Quick, give your mother a hug! Alison Sweeney is leaving Days Of Our Lives after 21 years on the show.

–Last night’s Sleepy Hollow season finale was damn near perfect. You now have until the fall to catch up on its perfection if you haven’t already. If you need some convincing, this insanely charming video of Tom Mison should do it for you.

–Anne Hathaway is the new queen of Sundance. Her film, Song One, is getting rave reviews, as is Richard Linklater’s latest.

–Diane Kruger and Joshua Jackson took a little break from the Sundance hoopla to go skiing.

–Zach Braff won’t refund his Kickstarter backers after his movie sold for $2.75 million at Sundance — and they’re fine with that.

–George Clooney is on a boat.

–Robert Pattinson says moisturizing has led to “a profound change” in his life so, um, yeah.

-This is a good sign for Enlisted (which is actually quite enjoyable): Fox just moved it from a sucky timeslot to a slightly less sucky timeslot.

-Does Jennifer Connelly never, ever age? It’s getting weird.

-When we asked for a Full House reunion, we didn’t mean as part of a really bad yogurt commercial.

-Random: the girl who plays Quinn on Scandal used to be Connie Britton’s nanny.

-Not only did B.J. Novak release a new book, he also got Emma Thompson and Mindy Kaling to read stories from it.

–Katy Perry posed in her underwear for GQ because that’s how she rolls.

-Everyone seems very excited by the new Raid 2 trailer.  Ok, then.