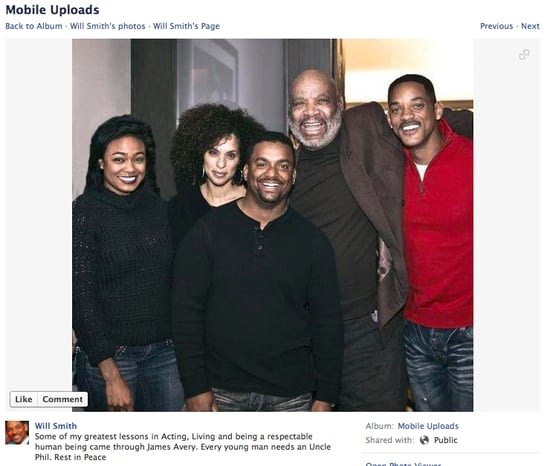 –Will Smith just posted a tribute to James Avery. Ahem. Did the room just get really dusty all of the sudden?

–Madonna posted a photo of her 13-year-old son posing with alcohol, and mommy bloggers were all “whutttt???” But Madonna has built her whole career on not giving a shit, so she’s fine with it.

–Michael Muhney was reportedly fired from The Young and the Restless for groping a costar’s breasts. You’d think Sheriff Lamb would know better!

–Ian McKellan may have accidentally outed a couple of his Hobbit co-stars. Oopsie!

–Justin Bartha just got married. I pity the fool who had to plan that bachelor party.

-Even though it would be sweet, sweet victory Jenny McCarthy haters (i.e. – the world) if those reports about her revealing her son doesn’t actually have autism were true, she’s denying them.

–Craig Robinson (aka The Office’s Darryl) just got an NBC sitcom order.

–Sandra Bullock said that she and Julia Roberts have “shared custody” over George Clooney. I know it was just a joke but I’m going to go ahead and believe that, thankyouverymuch.

–Idris Elba tweeted a dirty joke this weekend and the world collectively swooned.

–Cameron Diaz is on her book tour and the whole damn thing is pretty insufferable. She’s the reason I spent a lot of time swearing at my TV this morning while she touted her recipe for oatmeal with ponzu sauce and said crap like “I don’t use the word ‘diet’ because that implies deprivation.” Blech!

–Shia LaBeouf is a jerk who deserves to be called out for his Twitter antics. I just wish it was by someone more credible than Lena Dunham.

-I really like what Amy Adams is wearing. (Or maybe it’s just because I saw American Hustle yesterday and am grateful for any outfit that doesn’t expose her clavicle.)

-The first episode of Joseph Gordon-Levitt‘s TV show is on YouTube.

–Ariana Grande and Adrian Grenier have sort of similar names so everyone assumes they’re dating, but she says she has no idea who he is.

-I appreciate the level of perfection Meryl Streep and Margo Martindale appear to be striving for with their selfies.

–Ke$ha is in rehab for an eating disorder, which might have something do to with the fact her dickweed producer once called her “a f**king refrigerator.”

-This promo for “Up Close with Tig Notaro” is freaking me out, but I couldn’t turn it off.

–Kellan Lutz just denied that he’s dating Miley Cyrus. I wonder if she made him do it?

-Is the Queen forcing Prince Harry to shave his beard? Noooooo!

-A new trailer for House of Cards’ second season has landed. I still hate this show.

–Gwyneth Paltrow and her fam are ringing in the new year on a beach.

-It turns out that renting your apartment to Axl Rose is not a terrible idea after all.

-Well, this is all kinds of amazing. The cast and crew of The Good Wife made a music video for “Thicky Trick,” the song that was at the centre of the trial on last night’s episode.