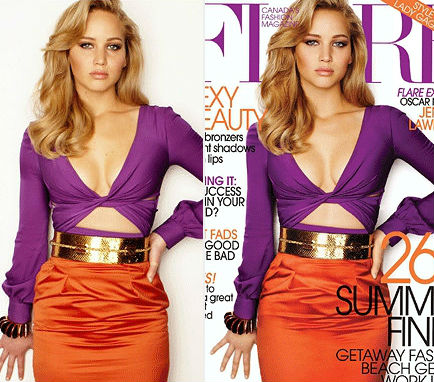 –Jennifer Lawrence talked to Barbara Walters about body image, and it was great.  “If we’re regulating cigarettes and sex and cuss words because of the effect it has on our younger generation, why aren’t we regulating things like calling people fat?”

-Does Kim Kardashian wax her baby’s eyebrows? No way. I mean, I wouldn’t put a lot past her but this can’t possibly be true, right?

-Yesterday, I said Katy Perry should just lipsynch. I guess she just proved why that’s a bad idea.

-Did anyone watch Katy with John Mayer on GMA this morning? They were debuting their new video, and he kept trying to be funny while she just giggled blankly.  Don’t make me worry about you, Katy!

–Katie Holmes reportedly has a “drastic new ‘do” that looks exactly like her last hairdo.

–Eminem and Rihanna’s video for Monster has landed.

–Matthew Perry is an advocate for drug courts and will fight with anyone who isn’t.

–Chris Brown‘s probation has been revoked following his arrest earlier this year.

–Norman Reedus is dating a girl less than half his age and I’m not going to judge because Norman Reedus can do no wrong.

–Shia LeBeouf has apologized for plagiarizing a comic by Daniel Clowes. Can the universe just be over him now?

-Here’s a trailer for Christina Ricci‘s Lizzie Borden movie. Looks fun, but I still have no idea what she’s doing in a Lifetime movie.

-The red-band trailer for 22 Jump Street has landed. I’m so in.