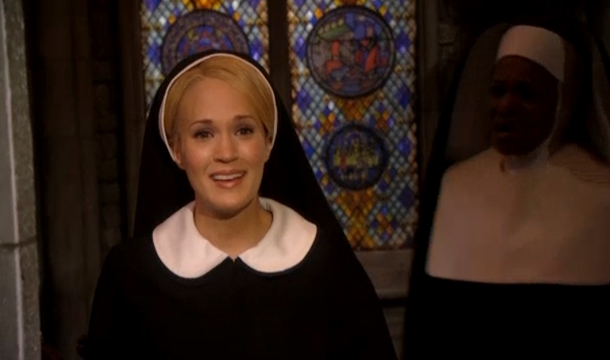 -Apparently, if you criticized Carrie Underwood‘s horrible Sound of Music acting skills, she’s praying for your damned soul because you’re sure to be heading straight for hell. That seems like *maybe* not the most Christian reaction.

–Katy Perry is on the cover of Marie Claire, in which she says Russell Brand really wanted her to have children but she wasn’t ready.

–Pippa Middleton is teaching us how to make cocktails. I knew there was something I always liked about that girl…

-Stupid teens are having racist meltdowns over Lorde‘s rumoured boyfriend.

-Here’s the first look at Aubrey Plaza as a zombie. Weirdly, this is the most animated I’ve ever seen her.

-Remember when Kelly Clarkson was all “You guise, I can’t wait to get pregnant OMGZ!” Yeah, she’s totally over that now.

-Meanwhile, Britney Spears says that pregnancy sex is “awesome,” so at least Kelly has that going for her.

-The Downton Abbey Christmas special promo is out, if you’re into that kind of thing.

–Mary-Kate Olsen has been spotted shopping for engagement rings — and nothing less than 5 karats, which means one little accessory will double her weight.

-I love that the “crotch mic” photo is the one everyone’s publishing today from the Fifty Shades set. Totally appropriate.

-Why is Ben Affleck suddenly opening up about his marriage to Jennifer Garner? Is he campaigning for an Oscar or something?

-Oh wait, he clearly isn’t, since he’s down on the paparazzi again. I don’t disagree with what he’s saying here, but he didn’t seem to have this problem around this time last year…

–Leighton Meester is set to make her Broadway debut with James Franco and Chris O’Dowd.

-I forgot how much I really like Evangeline Lilly.

-Attention: a new Beyoncé album is coming “at some point” next year.

–Selena Gomez‘s sound wasn’t working during her Jingle Ball 2013 performance, leading her to drop some f-bombs before leaving the stage.

-Sleepy Hollow maybe be wrapping up its short first season in a few weeks (boo!), but at least we’re getting a two-hour finale (yay!).

-Speaking of SH, I really liked this article on how the writers dreamed up Ichabod’s talk with the OnStar lady.

–Kendall Jenner and Harry Styles were spotted leaving a New York hotel together. Paul Rudd is going to be crushed.

-Brace yourself: it’s possible that Leonardo DiCaprio made out with someone who’s not his girlfriend. Shocking, I know.

–Amy Adams didn’t use boob tape in American Hustle, in case you were wondering.

-Two kids from Glee are engaged and talking about their wedding plans. Yay?

-The first promo for season 5 of Community has landed. Is it weird that I’m still not entirely convinced this show will return?

-Speaking of TV promos, here’s the first one for Girls’ new season.

-Here’s the trailer for Barefoot, starring Evan Rachel Wood and Scott Speedman. It looks super cheesy and I’m all in!