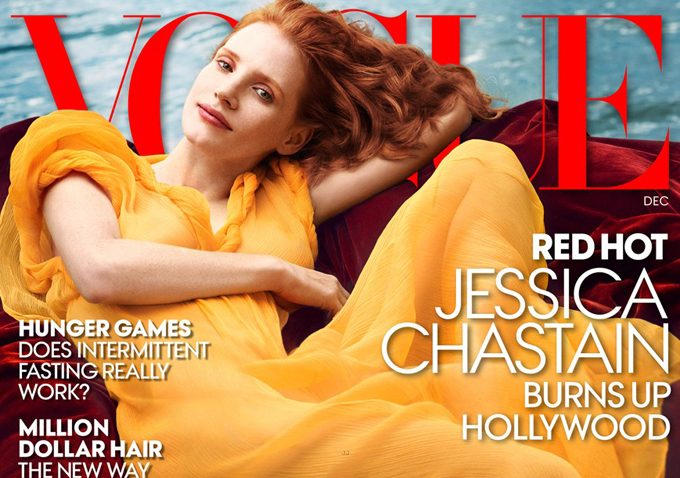 –Jessica Chastain shot a cute short video as part of her Vogue cover shoot (much like Kate Winslet’s).  I also really liked this gallery on the eight famous works of art that inspired Jessica’s looks.

-I guess they’re not lying when they say a new baby strains a marriage. Malin Ackerman split from her husband just seven months after giving birth.

–Kristen Bell was very cute on The Tonight Show this week, talking about her quiet wedding. “We picked up sandwiches and called it our ‘wedding brunch.'”

–Miley Cyrus is rapping about twerking in the new will.i.am video because being defined by a spastic dance move is a great career move, I guess?

-Also, Miley would like you to know that she’s NOT sleeping in her backyard teepee after getting burgled, ok?

-Glee’s Dianna Agron (and her moustache?) star in the new video from The Killers.

–Kanye West doesn’t appear very often on Kim Kardashian‘s reality show, but not because of any valid career reasons. “I don’t really do her show just because I don’t particularly like the way the producers shoot some of the shots. I’m very meticulous to that, right? I like to get a different DP [director of photography] or whatever.”

-In the same interview, the radio hosts kept calling Kanye out for his contradictory antics, and it was amazing.

-Another day, another photo of Idris Elba looking HAWT on the red carpet.

-I tweeted this yesterday but it’s awesome enough to link to: NPR’s Linda Holmes wrote a piece on how Peeta plays the role of the typical movie girlfriend in Catching Fire.

-This story is crazy: the producer of Pretty Woman says he was Israeli spy.

-This is weird casting news but I kind of love it: The OC’s Seth Cohen will play Zooey Deschanel’s ex-boyfriend on New Girl.

–Nigella Lawson‘s husband’s latest defense in that choking incident: “she was off her head on coke.” Sure thing, guy.

-This Hollywood Reporter feature reveals how the standard “no animals were harmed in the making of this film” disclaimer is often bullshit. The stories from the Life of Pi shoot are especially disturbing.

–Vince Gilligan says he hopes Jesse got away to Alaska at the end of Breaking Bad, but he’s pretty sure he ended up in prison. Sad face.

-12 Years a Slave and Nebraska lead the Independent Spirit nominations. I’m shocked that the ladies of Blue Is The Warmest Color were ignored, but at least Michael B. Jordan got some love.

–Alec Baldwin and MSNBC just released a joint statement, confirming the cancellation of his show.

-“Brian’s big announcement” that floated around the internet earlier today was a hoax, but that doesn’t actually rule out The Family Guy character may return.

–This headline is whaaaaa??? “Tori Spelling hospitalised for stress and anxiety after negative feedback to her slamming Katie Holmes as a plastic robot”

-In this new X-Men: Days of Future Past promo , Magneto is linked to the assassination of JFK.

-A new trailer for The Secret Life of Walter Mitty has landed. I’m warming up to this one.

–Angelina Jolie‘s rep is shooting down reports that she bought Brad Pitt an island for his birthday. Looks like he’ll need to find some other place to hide from all those kids…

-How do you make sure Julia Roberts doesn’t hog the spotlight on your roundtable? You make sure to also invite Emma Thompson. The ladies joined Oprah, Amy Adams, Lupita Nyong’o and Octavia Spencer in The Hollywood Reporter’s roundtable.

–Seth Rogen had been shopping around a script about a crack-smoking mayor for years. Thanks to Rob Ford, he’s now found a buyer.

-Meanwhile, Seth teamed up with James Franco to make a shot-for-shot parody of Kanye West‘s “Bound 2” video, and the results are awesome. (There’s even a split-screen comparison.)

–Brittany Murphy‘s mom has refuted those poison claims in a scathing open letter.

–January Jones joked that James Marsden is her son’s father. As if he doesn’t have his own baby drama to deal with.

–Katy Perry’s geisha costume at last night’s AMAs is getting slammed for being culturally insensitive.

–Lady Gaga wore the same dress she wears in her new Versace ads.

-After everyone started wondering why Justin Timberlake appeared at the AMAs solo and without his wedding ring, Jessica Biel took to Twitter to tell the world to “calm down.”

-I did enjoy how Justin teased Taylor Swift with his own “surprise face.”

-Speaking of last night’s AMAs, Rihanna debuted a doobie and the internet had lots of opinions about it.

-Best of all, Miley Cyrus trolled us all with her AMA performance. Yes, the cat was intentionally ridiculous, but her vocals were on point (even she trailed behind the backing track a few times).

-In case you missed the scene in which Family Guy killed off a main character, here you go.

-Speaking about the Family Guy backlash, creator Seth MacFarlane joked, “This is the first time I’ve ever gotten positive feedback from Tina Fey.”

-The New York Times got a bunch of famous people to star in some (very) short films. They’re all very weird, but at least they taught us that Michael B. Jordan makes a sexy cowboy (and Bradley Cooper should avoid dance movies).

-Apparently, this photo of Jennifer Lawrence and Nicholas Hoult staring straight ahead is proof that they look “suspiciously in love.” What does that even mean?!

-Sweet! Orphan Black is set to return in April and a new promo just landed.

-Stock up on groceries and don’t plan on leaving your house for a while: Party of Five seasons 1-3 is debuting on NetFlix Canada on Dec. 1st.

-Just when I was starting to break my sneaker obsession and start wearing big girl shoes, Puma appoints Solange as their new creative consultant. Uh oh.

-I don’t watch Sherlock, but the interwebs is very excited about the season 3 trailer.

-Brace yourself: the director of the Fast and the Furious movies is remaking Road House.

-The Beastie Boys is facing some backlash for getting into a legal tousle with the makers behind this awesome viral video over the use of their song, but the band just posted an open letter revealing that they are the ones being sued.

-The kid who plays King Joffrey on Games of Thrones has some very un-Joffrey-like plans: he wants to quit acting to focus on charity work.

-Here’s our first look at Vanessa Hudgens getting grimy in Gimme Shelter.

–Taylor Swift appears to be keeping Ed Sheeran firmly in the friend zone.

–Liam Hemsworth kinda sorta addressed rumours that he cheated on Miley Cyrus, saying “I know what the truth is and that’s all that matters. I know I’m a good person.” He also added, “I’m much happier.”

–Britney Spears is really sweet (and lucid!) in this Ellen video with Sophia Grace and Rosie.

-She was also hilarious on last night’s Daily Show, mocking Jon Stewart’s interview style. “You are so weird!”

–Scarlett Johansson is all sleepy-eyed and sultry on the cover of Vogue Mexico.

–Jimmy Kimmel pranked John Krasinski and Emily Blunt by wrapping their entire house in Christmas decorations and paper, complete with a fake snow machine. I dunno; that looks kind of awesome.

-Meanwhile, John was one of the stars to participate in Kimmel’s latest mean tweets video, along with Larry David, Amy Poehler, Aaron Paul and more.

–Alec Baldwin tried to ease the backlash over his gay slur in the most awkward way possible.

-A judge ordered Dina Lohan to have a full psych evaluation as part of her DUI trial. How has this never happened before?!

–Victoria Beckham auctioned off a whole bunch of clothes and donated all the proceeds to the British Red Cross for Philippines relief. Kim Kardashian did the same, but only plans to donate 10%.

-I really like this Kings of Leon song, so I’m glad they chose it for their next single (and that they cast Garrett Hedlund to star in the video).

–Here’s a promo for ABC’s special Thanksgiving-night Lady Gaga and the Muppets show.

–Pharrell Williams is only about halfway through his 24-hour music video, and it’s still going strong. Is that Steve Carell at 5:08pm?

-Speaking of trailers, the first one for Nymphomaniac is out and it’s super NSFW.

-Who else plans to hate-watch NBC’s Sound of Music?

-If the Thursday night box office receipts are any indication, Catching Fire is going to crush everything this weekend.

-The promo for the next season of Girls actually looks pretty great. Just when I think I’m out, they pull me back in!