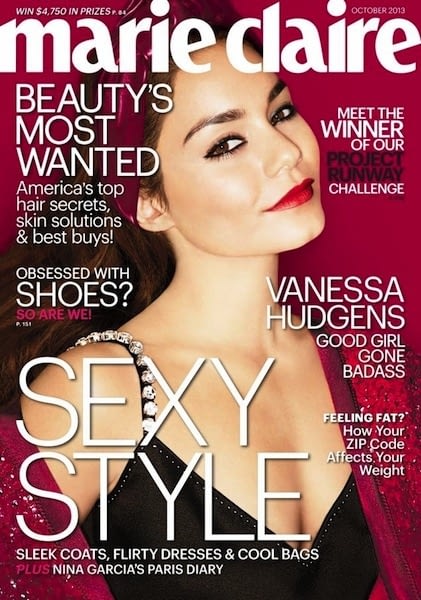 –Vanessa Hudgens looks crazy good on the cover of Marie Claire, where she defends her image and dismisses that drug talk. She’s also talking about how she wants an Oscar which I can’t even deal with today.

-TIFF has been crazy. Lots of star sightings, lots of parties and lots of movies. I’ve seen 8 films so far — two that I fell in love with (Can A Song Save Your Life?, Belle), four I liked a whole lot (The Grand Seduction, Rush, Like Father, Like Son, Blue Is the Warmest Color) and two that were just meh (Lucky Them, You Are Here). I’ve got four more, plus a few more parties (assuming I don’t die first. It’s a definite possibility).

-Speaking of last night’s Rush premiere, Liam Hemsworth showed up to support brother Chris. I didn’t make it to the after party, but my friend who was there said he didn’t look like a guy in a relationship.

-Meanwhile, remember that blind item last week about a starlet who lost a big cover? It looks like that starlet may have been Miley Cyrus, and the cover may have been the December issue of Vogue.

-It’s not all bad news. Miley’s hosting the second episode of this season’s SNL. Tina Fey and Arcade Fire landed the season premiere.

-Also, Miley’s new video has landed but judging by the Twitter reaction, I’m way too sleep-deprived and fragile right now to watch it.

-The Good Wife’s Josh Charles just got married. Sadly, it wasn’t to me.

–Jake Gyllenhaal brought his new girlfriend to TIFF. Taylor Swift is supposed to be here tonight. Let’s do this!

–Kristen Cavallari was arrested this weekend for speeding with an out-of-state license.

–DMX stripped naked and ran through a hotel.

–Gwyneth Paltrow is not the most courteous scooter driver ever.