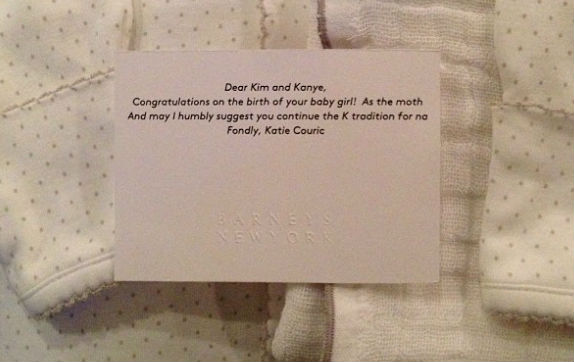 –Kim Kardashian is hashtag-pissed at Katie Couric for trashing her in In Touch Weekly and then sending her a baby gift.

-Yesterday was John Oliver‘s last night hosting the Daily Show, and it was awesome. Here are all 32 of his excuses for Jon Stewart’s absence during the summer.

-This Colbert Report segment slayed me. SLAYED ME.

-Speaking of Oprah‘s generosity, she gave away a car to a member of Jimmy Kimmel‘s studio audience.

–Donald Glover wrote and produced a new short film and now everyone who’s seen it is all “whaaa?”

–Kristen Stewart is wearing broken sunglasses. Wait, is this a trend now? Because that means I can bring, like, 13 pairs back into rotation.

-A deleted scene from Walking Dead lets us know that we missed out on Zombie Lori. But less Lori is always a good thing — zombie or not.

–Aubrey Plaza insulted Demi Moore last night on Hollywood Game Night (which, if you’re not watching, you really, really should!), but we’ll never know what it was because NBC bleeped it out.

-Oh Vanessa Hudgens. What happened in your childhood to make you think this outfit was a good idea?

-Is Lindsay Lohan trying to be the next GOOP? Hahahahahaahahaha!

-The Spectacular Now’s Miles Teller and Shailene Woodley‘s are the latest celebs telling you to shut up in theatres.

–Mary-Kate Olsen hung out with her boyfriend’s daughter, who looked about the same age as her. Not creepy at all.

-A new trailer for Joseph Gordon-Levitt’s Don Jon has landed. Not as good as the first, but I’m still in.

–Justin Guarini is downplaying a blog post in which he suggested that he’s totes broke.

–Jennifer Aniston was interviewed by that awkward guy who infamously interviewed Mila Kunis, and she did a pretty good job of rolling with it.

–Hugh Jackman is shooting down those rumours that he’s been offered $100 million to star in four more Wolverine films.

–Josh Duhamel wants to educate you on his 132-pound scrotum.

-I really, really liked this article called “How I Hate Strong Female Characters.” Def worth a read.

–Jon and I chatted about the Breaking Bad season premiere in this week’s Canada.com podcast.