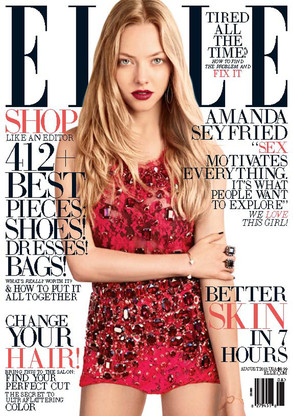 –Amanda Seyfried talks about listening to her vagina in the new issue of Elle. Her vagina should have told her to rethink those heart-emblazoned granny panties she wears in the photo spread.

-I don’t hate the idea of Ben Affleck playing the male lead in the Gone Girl adaptation, particularly if Emily Blunt or Natalie Portman lands the Amy role. I’m not really feeling the Charlize Theron rumour, though.

–Bill Clinton talked with Justin Bieber on the phone yesterday and forgave the pop star for cursing him out while urinating in public. It’s not like he hasn’t done worse.

-Meanwhile, Justin Bieber‘s BFF Lil Twist has been arrested for a DUI (in Bieb’s car, no less).

-Word is longtime Scientology supporter Leah Remini has quit the “church” after suffering through “years of interrogations” for daring to ask leader David Miscavige about his wife. The nerve!

-Hey girl, Ryan Gosling just wrote an editorial in the Globe & Mail about improving the treatment of farm animals.

-Uh oh. Now Amanda Bynes is dragging her tiny dog into the storm of crazy.

-I don’t know why Cosmo has a column called “Ladyboner of the Day,” but since today’s featured LBK is Joshua Jackson, I’m choosing not to complain.

-I cut Anne Hathaway a lot of slack when it comes to her ridiculous hats, but these gigantic pants will not stand!

-I’m kind of fascinated by all the accounts of Jay-Z’s art project, (especially the Vines of him dancing with Marina Abramovic).

–Charlie Sheen flew to Scotland to try to find the Loch Ness monster, which is as elusive as Sheen’s sanity.

–Sam Mendes and Daniel Craig will officially return for the next Bond film. And then can it be Idris Elba‘s turn? Please??

–Demi Lovato created a new scholarship fund in the memory of her late father, who suffered from mental illness.

–Salma Hayek tried (and succeeded!) to make her way through the “The Star-Spangled Banner” on Letterman last night.

–This week’s GOOP is even more riddled with mistakes than usual. Did she really spell MacGyver as Magiver?!?

–EW has our first look at Jamie Foxx as Electro in the upcoming Spider-Man movie. Though to be honest, I prefer the inside cover image with Orphan Black‘s Tatiana Maslany.

-Remember when Damon Wayans Jr. played Coach on the first episode of New Girl and then jumped ship to star in Happy Endings? Now that ABC cancelled that show, he’s poised to rejoin NG for a significant Season 3 arc.

-I love that this guy’s plea for a Toronto roommate has gone viral.

–Friday Night Lights’ Matt Lauria is officially sticking around for the next season of Parenthood.

–Two new clips and a featurette from the upcoming Wolverine movie have landed. Stabby!

-Meanwhile, this new Pacific Rim featurette has 10 minutes of exclusive behind-the-scenes footage. How can this movie still be tracking way behind Grown-Ups 2?!

-This might be the best news ever! Kristen Bell has just signed on to play a “snooty City Councilwoman from Eagleton” on the upcoming season of Parks & Recreation. Her character will be “Leslie’s equivalent, but richer and better dressed.”

–Jake Gyllenhaal has gotten to the “walking her dog” stage of his new relationship with Sports Illustrated model Alyssa Miller.

-The poster for Project Runway‘s upcoming season was deemed too nekkid for Los Angeles.

Victoria Beckham Opens Up About Her Childhood