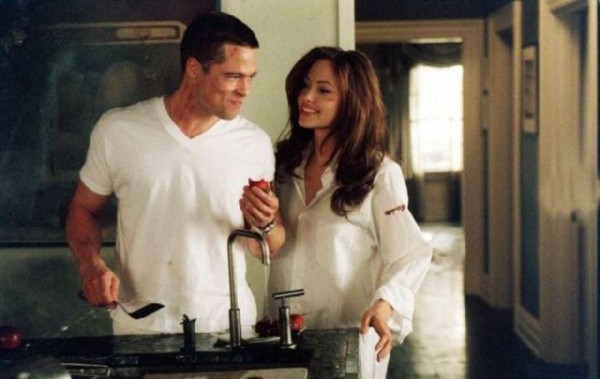 -There are not enough eyerolls in the world to cover this one: Angelina Jolie and Brad Pitt are releasing their first wine next month.

-Meanwhile, he reportedly gave her breath mints for Valentine’s Day. “It is sort of a joke — and not.” It’s sick how much I want this story to be true.

-Also, expect the mommy bloggers to lose it when they notice that Angie lets her sons wear nail polish.

-You know that Harlem Shake meme that’s going around? Cute and all, but that ain’t the Harlem Shake. This is. You can also see it in these classic music videos.

-Fox is going to attempt to adapt the awesome British comedy Gavin & Stacey. Even the presence of Parenthood’s lovely Jason Ritter can’t make this seem like a good idea.

–How I Met Your Mother’s Alyson Hannigan has been granted a restraining order against an alleged online stalker. Seriously, someone dared to mess with this?

–Lena Dunham looks great on the cover of Rolling Stone.

-Meanwhile, in wake of all the bullshit talk about Lena having a sex scene with the “out of her league” Patrick Wilson in last week’s episode, his real-life tweeted about it…and it was awesome.

–Chris Brown and Drake are suing each other. Of course they are.

–Matt Damon was a great sport on “Let’s Talk About Something More Interesting.”

-These Grammy Mini-Me replicas of Sunday’s red carpet looks might be the creepiest thing I’ve seen all week. And I’ve been riding the subway A LOT!

–Jennifer Lawrence turned down Inside the Actor’s Studio for reasons that are much too rational and humble for any actress to have.

-A paparazzi snapped a photo of the ultrasound pic Evan Rachel Wood was holding while leaving her doctor’s office, and now she’s justifiably pissed.

-It’s Valentine’s Day, which means Megan Mullally and Nick Offerman answer your questions on how to “engage in romantic love.”

-Meanwhile, Idris Elba’s Valentine’s message made me swoon. Seriously, I know now what getting the vapors feels like.

-In other V-Day discussions, which is better: You’ve Got Mail or Sleepless in Seattle? Fight!

–Kim Kardashian covered up her baby bump with feathers. So many feathers!

–Burning Love debuts on E! tonight, but you can stream the first two episodes of Burning Love season two are here. Spoiler: Adam Scott dances in the second one!

–Anne Hathaway says her fans booed her at the BAFTAs. She might want to look up the definition of ‘fans.’

–Matthew McConaughey is launching a clothing line, which totally makes sense for a guy famous for being shirtless.

-Hey girl, Ryan Gosling wants to be your Valentine.

-Speaking of Ryan, the “honest” trailer for The Notebook is priceless. “It’s basically the Olive Garden of love stories.”

Matthew McConaughey: Mask Up To Keep On Livin’

Hamilton Rules The Tony Awards (and The World)