–Kristen Stewart and Robert Pattinson were spotted on a (attempted) quiet date in Hollywood last night. Of course, no date is complete without having to wrestle your way through an adoring mob. Romantic!

-Is Chris Colfer trying to take over the world? The Glee star not only sold his first screenplay recently, he just released his first YA novel.

–Claire Danes and her teeny tiny baby bump were snapped on the set of Homeland.

–Aaron Paul is probably the only celeb who I’ll sit through an episode of Leno for, but his interview last night was totally worth it — especially because they kept showing clips of his appearance on The Price is Right. He should have used it as his Breaking Bad audition tape; he was acting kind of meth-heady.

-In other cringe-worthy clips from Aaron‘s archive, here’s an old Corn Pops commercial he did as a teen. You’re welcome!

–Agyness Deyn and Giovanni Ribisi were spotted packing on the PDA, as newlyweds are wont to do.

-The first couple of minutes of Happy Ending‘s lost kickball episode have surfaced. How did this show not get Emmy love?!

–Halle Berry is back on the set of her new movie following her head injury scare.

–Aaron Sorkin just fired everyone on The Newsroom writing staff — except his ex-girlfriend.

–Seth Rogen‘s wife has secured a restraining order against a crazed fan.

–Frank Ocean gave an interview about coming out on Tumblr.

-Is it weird that news of the Spice Girls performing at the closing ceremonies is totally making my day?

-Here’s the official poster for Mindy Kalling‘s new show. So they’re still calling it The Mindy Project? I was really hoping that was just some Lorem ipsum.

-The first trailer for Lindsay Lohan‘s Liz & Dick TV movie just features a still of her in costume. Exciting stuff.

–Barbara Walters is a total O.G! She refused to take George Zimmerman‘s phone call live on The View yesterday.

–Jordin Sparks is the latest star to pose in a bikini on the cover of Shape. Mazel?

–Tom Cruise is taking issue with P.T. Anderson‘s new Scientology-influenced movie, The Master, which means we’re all going to go see it.

-Speaking of The Master, a new trailer just landed. It’s the first one where the Ron L. Hubbard connection (not to mention the Oscar bait) is obvious. 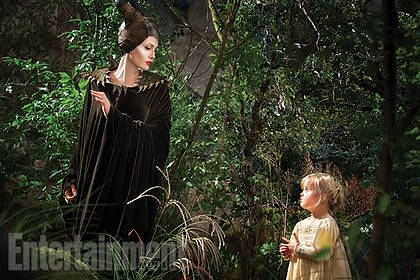 Angelina Jolie Shares the Screen with Daughter in Maleficent